The 2019-2020 NBA season kicked off on October 22, and all eyes are on big performers like Anthony Davis, LeBron James, Kawhi Leonard, and Paul George. With a new distribution of superstar players on teams like the Lakers and the Clippers, it’s likely to be one of the most competitive seasons we’ve seen in years. Not only are there changes in player-to-player dynamics, but in fan-to-team dynamics.

In the early days of the NBA, data analytics was still in its infancy. Today, there’s not a single NBA team that doesn’t use this technology in some way, with most teams having an analytics department. Whether it’s galvanizing fans to attend a pivotal game, buy merchandise, or check out the latest game recap, data analytics informs NBA teams in how to best engage their fanbase. How did the NBA transition from rarely using data, to it being an integral piece in the marketing process?

Remarkably, statistics show that less than 1% of NBA fans have attended a game in person. This problem isn’t totally unique to the NBA, as estimates have shown dwindling attendance at MLB games in recent years. Meanwhile, the NFL has been slowly working its way back up to its 2007 attendance rates. Outside the U.S, a similar downward trend in attendance was seen for other sports like rugby.
Has a sports engagement problem prevented fans from filling seats in their local arenas? The answer seems to be a clear yes. But as NBA teams share the results of implementing data marketing, it seems this problem can easily be rectified with the right insights.

Jared Geurts, Senior Director of Marketing Analytics for the Utah Jazz spoke openly about how the franchise made some simple changes that led to a 61% increase in digital revenue and a 42% decrease in digital spending.

Ticket sales exploded from $25,000 to nearly $1 million – strictly revenue earned from email campaigns. In the years prior, the team would send out general emails to all fans in order to sell tickets and bolster engagement. The only change they made? A bit of data-driven personalization. They segmented fans into different interest groups, such as those who prefer weekend games, and tailored email campaigns accordingly. This created a more authentic connection with fans as their specific interests were heard.

“We’ve actually, by quite a large margin, been the best team at converting new leads. That wasn’t the case before we really started focusing on personalizing those ads,” Geurts explained. “Just from some simple personalization and caring more about our customers than what we want to sell.”

Personalized Experiences at the Game

Another exciting development in NBA trends is how analytics is generating insights about fans while they’re at a game. By knowing more about who is showing up for games, teams are beginning to create interactive experiences that appeal to the demographics in the building. As Deloitte notes, something like requesting a song or earning rewards after a certain number of trips to a concession stand helps fans feel like they’re not only at a game, but part of the collective experience. Much like email campaigns, stadium screens are becoming more personalized as well. Fans sitting in certain sections may see different promotions based on who they are/what group they are in attendance with.

Drawing Outsiders Back In

Data insights from sports apps may even help teams reach those elusive fans who’ve yet to attend a game or haven’t attended in many months. With the right targeting, it can be just a reminder these fans need to remember they’ve been wanting to attend a live game. By forging partnerships with apps and offering special deals to fans on those apps, teams build a promising bridge for connecting with fans on the fringe. 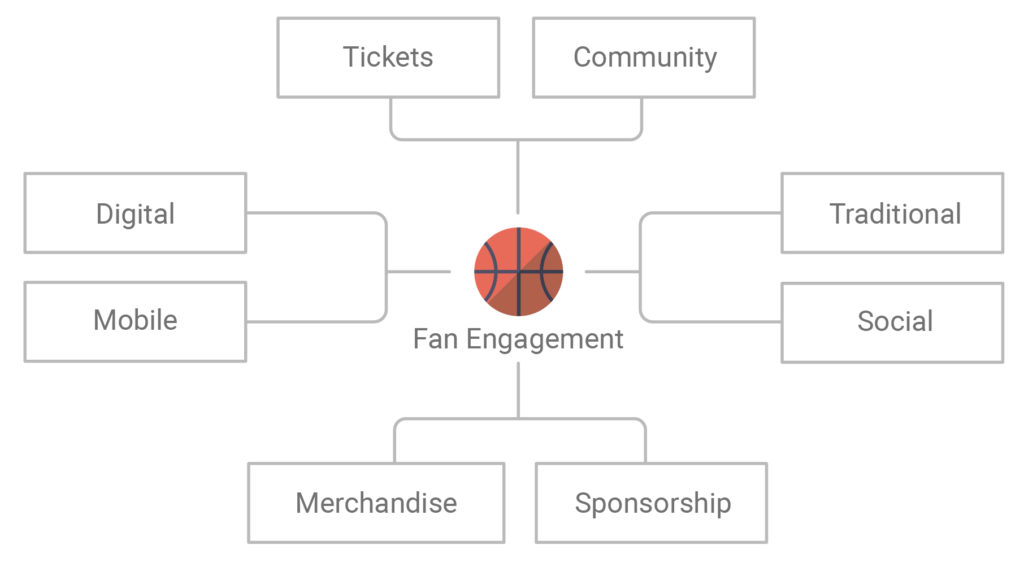 Relying on new technology has changed things for both fans and players. It’s not a new practice to rest high-performing players as certain points in the season. Yet, fans have been much more vocal about their disappointment on social media in not seeing their favorite players at the games they attend.

“Analytics have become front and center with precisely when players are rested, how many minutes they get, who they’re matched up against,” said NBA commissioner Adam Silver.

Teams are also using analytics through biometrics and wearables to determine when players are becoming fatigued and may need rest. Silver mentions the delicate balance of upholding their obligation to fans, while simultaneously keeping star players in the best health possible.

In addition to fan engagement, Silver told interviewer Daniel Pink that analytics are now used for scouting new players, generating more detailed game stats, and even aiding players in improving their game on the court. Data also allows players to prepare for games with detailed stats about the opposing players they’ll be covering. With so much room for perfecting and maximizing success both on the court and in the stands, the sky is the limit for NBA teams implementing data analytics this season.