The FIFA World Cup is not only the world’s biggest sporting competition, but it’s one of the biggest events in the marketing calendar. Every four years, the biggest brands think up new ways to engage with customers on digital platforms. This time around, marketers didn’t take their eyes off the ball. Here are three of the best marketing campaigns and social media posts from the 2018 World Cup.

Nike’s tailored-made their Risk Anything campaign for the 2014 World Cup. It was so successful, the sportswear brand brought it back for this year’s competition. The omnichannel campaign, which spans television, radio, print media and online advertising, features the world’s most famous soccer players in risky situations on and off the pitch.

The hashtag #RiskEverything started trending back in early June before the World Cup kicked off. Since then, the campaign has generated 6 billion impressions across various channels and more than 240 million views on YouTube and other video platforms, making Nike the most-watched marketer in the World Cup.

Why does this campaign work so brilliantly? Aside from all the star power — soccer superstars Cristiano Ronaldo, Wayne Rooney and Gerard Pique have all appeared in the campaign — Nike resonates with soccer fans by creating emotionally-charged narratives. Risk Everything features soccer players overcoming the biggest challenges in the beautiful game.

Perhaps Nike will bring this ever-popular campaign back for the World Cup in 2022.

For a fresh take on World Cup marketing, look no further than Coca-Cola, who created a campaign that tugged at the collective heartstrings of soccer fans around the world. After Iceland’s surprise performance in this year’s tournament — the country, with its tiny population of 330,000, managed to make the group stages — Coca-Cola thought the time was right to celebrate the team’s achievements, so they asked goalkeeper Hannes Thor Halldorsson to direct and star in a slick new ad.

The promo, which aired throughout the World Cup, quickly generated social media buzz and has been watched more than a million times on YouTube alone. Like Nike, Coca-Cola creates an emotional connection with its audience and spins a narrative of overcoming the impossible.

“Coke has helped to pump up the Icelandic side though, with a magnificent advert,” says Irish media company Buzz.ie. “They’ve put a twist on the infamous ‘Viking Clap’ which made the Iceland fans famous in France. Using snowboarders, fishermen, welders and, of course, the team.”

British retailer Aldi stole the spotlight when it announced it was closing its 700 stores early on Sun. June 15, 2018, if the England national football team made it to this year’s World Cup final. The reason? Employees wouldn’t have to work and could watch the game from home. The company posted the news on its Twitter account, and it got everyone talking about the brand’s act of kindness. 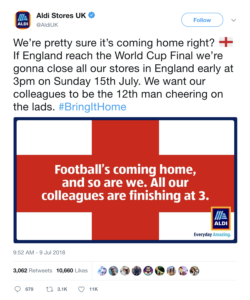 With more than 3,000 retweets and 10,000 likes, Aldi’s tweet made its mark on the British public and, as a result, the retailer increased traffic to its website.

Despite Aldi’s promise, their staff did have to turn up to work in the end. England lost 2-1 to Croatia in the semi-final of the competition.

The three companies on this list have moved the marketing goal posts. Utilizing digital platforms like YouTube and social media, Nike, Coca-Cola, and Aldi have created memorable World Cup campaigns and social media posts that increased brand awareness and moved customers through their sales pipelines. These brands definitely scored!