Why Marketers Need to Pay Attention to Real-Time Analytics

You know that old cliche about opportunity knocking only once? It’s true. That’s probably why it’s such a cliche. In marketing, staying plugged into real-time trending topics presents opportunities that can be capitalized on and turned into awareness, engagement, or even selling opportunities.

Oreo is a perfect example of how having a creative team that’s ready to act on a whim can be turned into marketing gold: 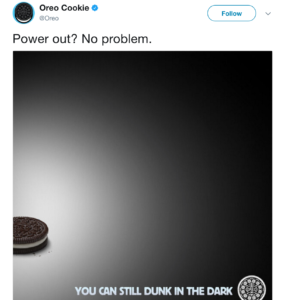 For context, a power outage interrupted the 2013 Super Bowl that led to a 34-minute delay while electricians tried to get everything working again. Oreo managed to whip this together during that time, garnering over 15,000 retweets, 6,000 likes, and lifelong notoriety as an example of how beneficial real-time marketing can be.

Four years later, more people likely remember this ad than who won that year’s Super Bowl (It was the Baltimore Ravens narrowly staving off a frantic San Francisco 49ers comeback).

Or how about this one from Arby’s which generated a staggering 80,000+ retweets.

One question made at the right time generated worldwide awareness. Would Arby’s ever had generated 80,000 retweets from a conventional tweet that was implemented during their strategy meeting weeks prior? Most likely not. They were able to drum up that much attention and engagement because it was topical and hundreds of thousands of people at the time were tuned into the Grammys and social media.

What’s most impressive about these two in particular is they were completely spontaneous and unpredictable. Nobody could have imagined the Super Bowl lights would have went out, nor would anyone have thought Pharrell would wear a hat that looks like the Arby’s logo (Barring a secret endorsement deal between the two).

Some brands can write up a tweet in advance just in case of an occurrence, as NASA did here, but it’s going to impress upon people even more if you write up an ad that nobody would have seen coming. Then they’ll say, “Wow! How did they get that out so fast??” and that’s when the awareness and engagement really rolls in.

This is where social media really benefits the marketer. It allows their advertising to be as topical as it can possibly be, reacting in real-time to events the rest of the world is watching and joining the conversation.

Being able to seize opportunities during events is key because most people watching that event are also likely to follow the discussion around it on social media. Twitter, specifically, is the top platform for this since it’s where real-time conversations are occurring most.

People have opinions, they want to spout them off, and there’s nowhere better for that than Twitter. Thus why Oreo and Arby’s immediately turned to Twitter to send their messages heard ’round the world. Nowhere else can people engage on a single conversation with others better than the social media platform that best corrals conversations on specific, trending topics.

Paying attention to real-time updates goes beyond trending topics, however. It also includes website optimizations and data that can also be immediately seized upon. Amazon.com, for example, practices utilizing real-time updates in plain sight without you even really noticing:

“Amazon has at least five sections of recommended items based on your browsing history: New for Your, More Items to Consider, Related to Items You’ve Viewed, inspired by Your Browsing History, Additional Items to Explore. How do they do this? Targeted marketing. Real-time recommendations create a personal shopping experience for each and every customer….

Amazon is able to effectively upsell and cross-sell products at every interaction point.”

Everything you search for, add to your cart, or buy on Amazon is immediately sent to a database used by the company in real-time to find items you would most likely want to purchase. This is how they turn single sales into sales that double, triple, or quadruple amounts spent by buyers, because you just can’t have that one frying pan you really wanted without a full knife and dinette set.

You can also even split-test with real-time data, again another tactic used by Amazon to determine the most effective optimization. However, it’s a tactic that can be employed by anyone as it simply involves moving things around on a website, determining where people are more likely to search and click, as well as what CTAs they’re more likely to click on:

“Let’s say you wanted to test a couple different versions of a new “Purchase” button to see which one received more in-app purchases. A developer can setup a quick split test, let it run a few minutes, and stop it. Within a few minutes, the data they would have would be significant enough to make a decision.”

This is a quick and easy way of determining what works and where. Of course it would be better to run it over the course of a week, thus allowing for more volume, but you can still gain some takeaways and insights from a few days worth of metrics.

Real-time analytics allow you to make real-time optimizations, rather than sitting on your hands waiting for a campaign to end. It adds some spontaneity to the rigidity that serves as both a gift and curse to marketing agencies. Having a set, organized campaign is always helpful, but, as we’ve seen throughout this blog, you raise your chances of going viral by capitalizing via real-time decision-making.

Creativity never takes a day off. Even when the Super Bowl is on and you already made up your ad for TV or social media, real-time occurrences that will make the internet explode need your attention. These are the opportunities that only come around during significant events.

Some of our top campaigns have been a result of noticing these trends. When a coup was being staged in Turkey, we saw this as a perfect opportunity for introducing our real estate client to a new market.

Sure enough, Turkey to this day remains one of our most interested regions, simply because we made ourselves noticeable in a time where people were at their most likely to move.

We could have ignored it. The coup began at 6PM where we were and that was closing time. But rather than let an opportunity go to waste, we wrote up some ads, identified some regions, and sent them for the people to see. We now have an entirely new region to market to.

Just like with everything else in market, going the extra mile can change the course your agency takes. You can be the agency that stays rigid and does everything within a 9-6 block, or you can be the one that makes great marketing campaigns AND pays attention to trends that happen off the clock.