The Art Of Podcast Marketing

Where the people go, the brands and money will follow. Podcasts today are as popular as they’ve ever been because its convenience allows listeners to forgo traditional information outlets in favor of condensed lessons from their preferred dispenser.

That information can be anything. Whether it’s financial advice, TV show breakdowns, history, or just your favorite comedian rambling into a microphone for an hour, there’s a niche for everybody. If an interested listener wants to hear about a specific topic, there’s a strong likelihood that podcast exists.

It’s all a part of the drive for convenience. Humans have always invented for the luxury of convenience, but modern technology has ushered in an era where convenience is expanding at a breakneck speed. Why read or waste time listening to the news waiting for the information I need? I can find a podcast from someone more knowledgeable and in-tune with the subject to educate me.

For example, the ‘Hardcore History’ podcast, while extremely lengthy at times, can condense everything you need to know about World War 1 into a series of five episodes. So rather than reading through tedious detail after tedious detail, I can get all the important, need-to-know info from the guy who studied it for years.

Think back to the examples provided in the second paragraph and consider where the value is. A financial advice show will likely come from someone respected in that industry. A TV show breakdown podcast would be from an industry insider or someone who has developed an online following. A comedian with a successful podcast is likely genuinely funny even off stage and has an infectious personality beloved by their fans.

Those are the keys to podcasting: being so passionate about a subject that you can talk for hours about it, and providing value by showcasing your expertise on a subject people want to learn about. 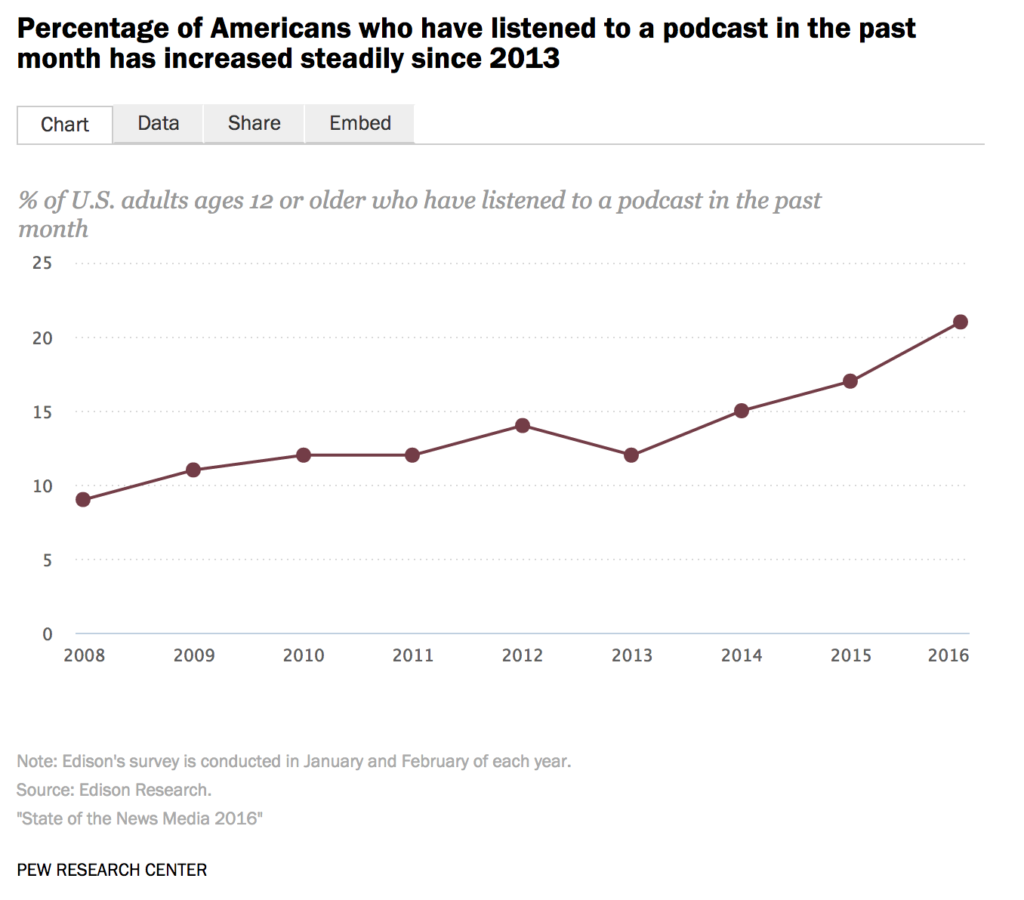 While it’s no surprise that digital startups and websites like Buzzfeed, Slate, and Radiotopia have made investments in podcasts over the past three years, it is noteworthy that legacy media like the New York Times and Wall Street Journal have also done the same thing. They saw where the people were going and addressed it, before they got left behind.

Now let’s say you want to start a podcast. Where do you even begin?

As mentioned before, you start with what your podcast is going to be about; obviously something you’re extremely passionate or knowledgeable about. If you love history, talk history. If you love basketball, talk basketball. If you love cooking, talk cooking. Remember: you’re trying to provide value, so talk about something where you know things that less-informed people want to know about but don’t have the time to learn.

Now you may know a lot about a subject, but need to organize it. People enjoy being educated about a subject they’re interested in, but they’re probably not interested in hearing that in the form of rambling that jumps from tangent to tangent. Instead, create and follow an outline that you make before every podcast:

“A podcast should have an intro, body and conclusion. You don’t have to write a script that you read word-for-word, but just a bullet point list of what you’ll talk about and in what order.”

You also want to make it as long as necessary to cover the essentials, but short enough to keep it interesting. For example, I have a fascination for history and a specific time in history. That history podcast I mentioned earlier knew his audience well enough to break up his feature on that historical point into a series of episodes. So instead of what would have likely been a 20-hour podcast, it was instead five 4-hour podcasts.

Building off of that, segment your content. It’s an effective way at “breaking up the rambling by providing structure of where you need to go during the show.” I listen to a popular comedian’s podcast and even though rambling and going off on tangents is a hallmark of the show, it can get exhausting. He recognizes this and breaks it up with ad reads and emails from fans.

Also, don’t try to be too out-of-the-box when creating your podcast’s name. It’s fine to make a catchy or clever name, but ensure that it’s a name that will show listeners that your show is on the topic they are interested in:

“Don’t choose a name that needs further explanation to communicate what your show is about. No clever name is necessary if you can convince the potential listener that your show is precisely on topic.”

So you got your podcast’s content, its name, and its subject, now comes the hard part: building your podcast and sticking with it.

It cannot be reiterated enough how integral it is to be consistent in your posting. If you’re that serious about podcasting, you can’t become discouraged early on because nobody’s really listening besides your friends and family. It’s going to take a lot of podcasting and a lot of hard work. If you even stop for a week, it’ll affect your positioning on iTunes podcast rankings.

Maximizing your iTunes rankings, and optimizing your podcast overall, is a different beast. Here are a few tips from a popular podcaster:

Understand the direction podcasts are going in, as it could very well be yet another medium that replaces traditional legacy media. “9 out of 10 marketers believe that podcasting represents uncharted territory and opportunity” and “overall, podcast listening increased from 11% to 36% [as of 2016], translating into an estimated population of 98 million.”

Even more important are the age demographics:

“One in four Americans ages 12-54 listened to a podcast last month. Just 11% of Americans 55+ listen to podcasts monthly.”

If trends can predict anything (and they always do), it’s that the younger generation dictate them. Seeing as they’re gravitating towards podcasts, then it’s fair to assume that the podcast market will grow. It remains a burgeoning industry with unlimited potential that allows for independent broadcasting with no strings attached.

You want some perspective of just how much podcasts and YouTube are winning? Joe Rogan, host of the Joe Rogan Experience, claimed he gets 30 million podcast downloads per month. By comparison, Fox News Channel, Cable TV’s most watched-network in 2016, averaged “2,429,000 total prime time viewers and 1.4 million total day viewers.”

YouTube’s top entertainer PewDiePie had 109,563,8282 views between April 17-30th over 18 uploaded videos. You no longer need to work your way through the ranks to join a newspaper, online magazine, or even to get your face on the news anymore to cultivate a following.

All you need is a microphone, a concept, and an idea. No wonder more and more people are gravitating towards podcasts and YouTube as professions and outlets of information.

Did you hear that sound? That was the changing of the guard.