What the NFL Can Learn from the NBA On Social Media

About a week ago, I, along with millions of other people, were treated by the NBA’s official Facebook account with a behind-the-scenes look at reigning MVP Stephen Curry taking shots before the game. 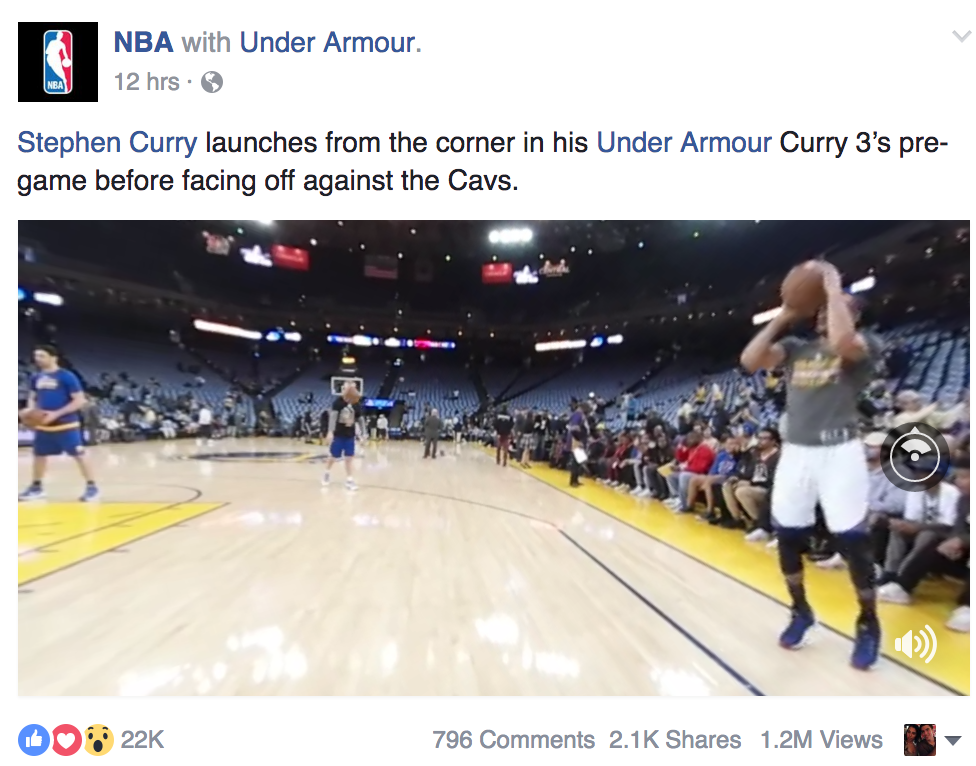 Not only was I able to indulge in this pull-back-the-curtain moment, but I was able to control my view, too! Fans pay thousands of dollars, and arrive hours before tip-off, to see a player of Curry’s caliber practice and here I have a front-row seat for free!

The NBA just gets it. Most importantly, they know how to connect with milennials. The NBA has the youngest audience among all American sports leagues with the average fan being 37-years-old. The NFL fan by comparison is 47-years-old, while the MLB fan is 51.

Reaching out through the right platforms is also key for the NBA, who is a major employer of Snapchat and Vine to peddle out clips:

They also connect through fashion, as explained by ESPN’s Darren Rovell:

“Young basketball stars today are ingrained in culture and fashions and life in a way that the stars from other sports here are not,” said Darren Rovell, who covers the business of sports for ESPN. “People talk about Russell Westbrook’s glasses and Dwyane Wade’s shoes. When you look at the numbers in terms of most Twitter and Instagram followers, the NBA blows other sports away.”

It’s no wonder why the NBA is even being predicted to overtake the NFL, in terms of popularity. They have a message they want to convey and they won’t allow copyright restrictions from spreading that message globally.

If the fans want NBA all the time on any outlet, why not give it to them? Why deprive fans of your product when all they want is more of it? It would be like making a great sandwich and only offering tiny bites when you can easily just give each of your fans a whole sandwich.

Thus, you get awesome controllable videos like the one above featuring Curry.

As an avid NBA fan, there’s nothing that can appeal to me more than even more basketball on top of the basketball I already watch.

The NBA is extremely gracious in its content availability, far more than any other league. They see widespread use of game clips by the media and fans of the game not as copyright infringement, but as an opportunity to spread its influence. This runs contrary to the vice-like grip the NFL and MLB have on clips of their games, which are generally kept close to the chest.

The NFL, in fact, is so strict that it actually issued a cap on the amount of video clips its teams can provide on Facebook or Twitter during games. As a result, you get clips mocking the practice like this one:

The NFL has since walked back on its policy to fine teams for using game clips. Nevertheless, it goes to show just how little the league values social media as an outlet to create a larger following for its sport.

Just compare their Twitter followings. Despite the NFL being the country’s biggest sport, it has 4 million less followers than the NBA. The MLB and NHL lag far behind with 6.68 million and 5.51 million followers, respectively. This isn’t due simply to demographics, but to the NBA having a liberal clip-sharing policy.

The difference is even more substantial on YouTube, the ultimate catchall for video clips. While the MLB and NHL both flounder with less than a million subscribers, and the NFL musters only 1.8 million, the NBA boasts a staggering 7.4 million followers.

Plus, I can find channels that exclusively make videos using NBA content. For example, the channel ‘FreeDawkins’ regularly creates individual player highlights from games night in and night out. So while I was busy watching the Miami Heat, I can wait a few hours and check out ‘Dawkins’ for highlight videos of other players who played that night:

While ‘FreeDawkins’ has had their channel shut down before (They were originally just known by ‘Dawkins’), the NBA isn’t cracking down on it heavily. No such channels exist for the NFL, MLB or NHL. It would be impossible to find an independent account that would exclusively give me highlights of a certain player I want to see.

The NBA embraces its the participation of their fans and their love for the sport. It’s the country’s fastest growing sport because it ran full steam ahead into the social media era populated by milennials who want their highlights and info fast and concise. They didn’t purposely restrict their presence as other leagues did.

And maybe the NFL is comfortable with their standing, despite losing viewers. It’s not surprising from the league that issues penalties and fines for players that want to celebrate touchdowns or any other accomplishment. Their outlook has long been an authoritarian one with widespread control of its players’ actions and now the potential media outlets it’s product can be promoted on.

There isn’t a better time for the NFL to start embracing social media, either. Like the NBA, the NFL is facing a shortage of recognizable names that even the most casual viewer can identify. Basketball has already lost Kobe Bryant, Tim Duncan and Kevin Garnett, and will soon lose the likes of Dirk Nowitzki, Dwyane Wade and Carmelo Anthony likely within the next five years.

So rather than wait it out, it builds up the personalities, aura, and names of its new league faces (Anthony Davis, Stephen Curry, Karl Anthony-Towns, etc.) through outlets such as YouTube, Snapchat, and Vine.

The NFL is facing a similar issue. Peyton Manning has retired. Aaron Rodgers and Cam Newton’s teams are in shambles. Tom Brady is 39 years old. Ben Roethlisberger is considering retirement. Household names that casual viewers can easily identify are disappearing. While there are studs like Odell Beckham, Jr. and Ezekiel Elliott that will keep interest in the individual, it’s a stark difference from the likes of Brady or Manning that anybody could recognize.

This would be the perfect time for the NFL to allow independent viewers of the game to create channels to showcase these players. If I wanted to tell a friend about a rising star in the NBA, for instance, I can easily find highlight video after highlight video of games that show just how skilled that player is. You may not know a rookie like Karl Anthony-Towns, but you might want to know more after watching this well put together highlight video of a 47-point outing:

It would be difficult to do the same with the NFL. I would have to go directly to their YouTube channel and hope they’re as detailed in their highlights as a channel like ‘Dawkins’ is with NBA games.

In fact, I did the same with the NFL, searching for rookie Ezekiel Elliott’s best game, and found one highlight video. If you’re surprised it was made by the official NFL account, you haven’t been paying attention. That video has 111,000 views.

The video posted above has 74,000 views, but take note that Towns is playing in Minnesota, while Elliott plays in Dallas, and isn’t hyped up by mainstream outlets like ESPN nearly as much.

The onus of building up player personalities and legends is squarely on the shoulders of the NFL, while the NBA raises few qualms on allowing its fans to distribute its product without proper licensing. As a result you get channels like ‘Dawkins’, which has nearly half of the subscribers the NFL has on YouTube.

And that’s after having their channel taken down on a number of occasions.

But this isn’t to say the NFL is completely tone deaf because they do put out quality content. Here’s a video by the Seahawks using a 360 cam to showcase their players running out of the tunnel:

So the NFL and its teams has embraced some features of the social media era. But will it ever loosen the reins it has on its product, or will it allow its game to be seen a wider scale?

Tell us what you think on our Facebook page.