November 1, 2016HOW TO: DIGITAL MARKETING

Bud Light left a sour taste in the mouths of millions of people and, for once, it wasn’t because of their beer.

Despite being America’s leader in U.S. beer sales at a staggering $6.1 billion, not enough money in the world could convince the advertising executives at Anheuser-Busch InBev that their “Bud Light Party” ad campaign was doomed from the start.

Adweek reports that “AB InBev wrapped up its Wieden + Kennedy campaign starring Amy Schumer and Seth Rogen a few weeks ahead of schedule.” The news comes on the heels of the company cutting its revenue forecast for the year in response to a disappointing third quarter [Between July 1st and September 30th] that saw declines in Bud Light sales.”

You heard that right. Sales of Bud Light declined during the openings of the NFL and NCAA football seasons, the Olympics, the height of the outdoor barbeque season, and the end of the MLB regular season. That shouldn’t be possible.

The ads began running during the Super Bowl, with the initial commercial featuring Rogen and Schumer urging Americans to join a mock “Bud Light” political party, in a play on this year’s presidential race. It has now been cut short, not even two weeks before the November 8th election.

By comparison, Bud Light’s “This Is Your Can’s Year” campaign, which promotes their cans with NFL team logos for the new football season (and nothing more) is experiencing far better results.

I wonder why. Could it be because Bud Light’s audience is composed mainly of middle-class, blue-collar NFL fans, and not people who want to hear about a gender wage gap from celebrities who wear their political affiliations on their sleeve?

Schumer, in particular, has been extremely outspoken in her views and has received a great deal of flack for them. She recently caused hundreds of people to walk out of a recent show of hers when she began to criticize and demean Donald Trump and his supporters.

The response to the commercials has been so poor and polarizing that Bud Light’s YouTube account had to disable its comments and rating system. Its ‘Equal Pay’ ad currently sits at over 3.5 million views, but there’s no way to properly judge the response.

However, we can get a gauge of the response from one of the few recent videos Bud Light has yet to disable comments or its rating system for.

The results are not pretty.

Here’s just a small sample of the top comments and the amount of thumbs up they received:

“Why is Amy Schumer ruining every Bud Light commercial?.” (198 thumbs up)

“If Bud Light is trying to convince people NOT to buy their beer, they’re doing a terrific job. The sight of Amy Schumer is enough to send millions running away screaming.” (164 thumbs up)

“Hey Bud Light, because you disabled comments and likes on your equal pay commercial like a bunch of coddled babies, I’m commenting here. Are you fucking serious, I mean are you actually that stupid or are you just crumbling to this crying feminist narrative that women are so poorly treated. The point you made about women paying more for cars, where the fuck did you find that, it makes no sense. If anything men have to pay more for insurance but you don’t see us crying about it because we actually understand statistics. Your commercial truly follows suit with your product, it just leaves a shitty taste in your mouth.” (262 thumbs up)

It doesn’t get much worse than its ‘Labels’ ad, though, where Rogen proudly exclaims that “Beer should have labels, not people!” and Schumer begins to say “Gender identity…it’s really a spectrum” before being cut off.

That YouTube video has recorded 294,514 views and boasts 298 likes to a staggering 1,706 dislikes. Once again, all of the comments allude to not wanting to be preached to, obvious pandering to those who identify as liberal or progressive, and arguments over gender identity.

The negative response to Rogen and Schumer has actually spread. A Bud Light ad featuring Paul Rudd and Michael Pena has 71 likes and 107 dislikes. Another featuring Mark Cuban as a Super Delegate has 66 likes and 114 dislikes. A Rhonda Rousey-focused ad sits at 123 likes and 180 dislikes.

A majority of the people that like Bud Light, or just have issues with companies that have left-leaning political ideologies and are proud to show it, do not care for this campaign. At all.

It’ll be interesting to see how Yuengling fares after its owner recently voiced support for Trump.

It was clear that Bud Light was trying to tap into a new market and it showed in the results. While overall numbers were down in Q3, there were “positive signs in brand health evolution, driven by milennials and Hispanics.”

“The Bud Light Party campaign helped us improve these brand attributes, but it did not translate to improved volume and share performance. While we are clearly not satisfied with Bud Light’s performance, we are already leveraging what we’ve learned to develop and executive new work.”

In other words: “We failed.”

There was also a 5.1 percent drop in sales in Brazil, despite the brand’s sponsorship of the 2016 Rio Olympics. It’s unknown whether the ‘Party’ campaign was related.

Bud Light’s failure is that they’re peddling a blue-collar product with two celebrities, who clearly don’t align with the views of their audience, promoting progressive, anti-conservative viewpoints.

Topics like the wage gap and gender roles don’t appeal to the consumer of Bud Light, which had previously rooted itself as a common, every-man type of beer enjoyed during football games and backyard barbeques. In fact, not only does this audience not care, they don’t agree with it.

Whether or not you agree with their stance, it’s still a monumental failure by Anheuser-Busch to assume a polarizing, issue-driven ad campaign would be accepted by its audience. Ad campaigns should not divide, nor should they alienate its loyal buyers, even if their purpose is to attract new customers.

Most of all, they don’t want someone’s political and social views shoved down their throats, regardless of who they support.

There’s a similar trend in the NFL, where the league and the San Francisco 49ers support of Colin Kaepernick’s National Anthem protest has been met with a boycott of the league by its fanbase.

NFL ratings are down for the first time in a long time. While Kaepernick certainly isn’t the sole reason (Too many penalties, too many commercials, too many stoppages in play, the Red Zone channel, and a surprising decline in the quality of play have also been cited as reasons for fans tuning out), it has still left many fans looking for better things to do on a Sunday.

The bad times kept rolling for the NFL this past Sunday night. Not even a fierce, closely-contested matchup between the Dallas Cowboys and Philadelphia Eagles could stand up to Game 5 of the World Series. Nearly 6 million more viewers tuned in to see if the Cleveland Indians would win their first title in 68 years.

They even won the coveted 18-49 demographic in a shocking upset.

Sports are often seen as a refuge from the bombardment of negativity from the 24/7 news cycle, but many fans feel they have lost that with Colin’s political statement. Out of the 29% of fans watching less NFL, 40% of them cited Kaepernick’s protest, according to a Yahoo Sports poll of 1,136 Americans.

Once again, a major brand has forgotten its audience. It should go without being said that a brand should always be loyal to the foundation of fans that helped it grow and thrive. Otherwise, you get cases like AB and the NFL, where taking a stance that runs contrary to their bases’ views has resulted in less customers and outright boycotts.

The real issue, regardless of which side of the spectrum you stand, is a brand inserting politics into its message. Divisiveness should never be a strategy, and that’s what you’ll get with any inkling of an affiliation on either side.

But with the poor returns in their Q3 results, and the backlash of politics infused into sports and advertisements, perhaps Anheuser-Busch will wise up and employ a spokesman/men/woman/women who can truly relate to the blue-collar worker who wants nothing more than to sit back, watch a football game, and enjoy a frosty, cold brew of Bud Li- 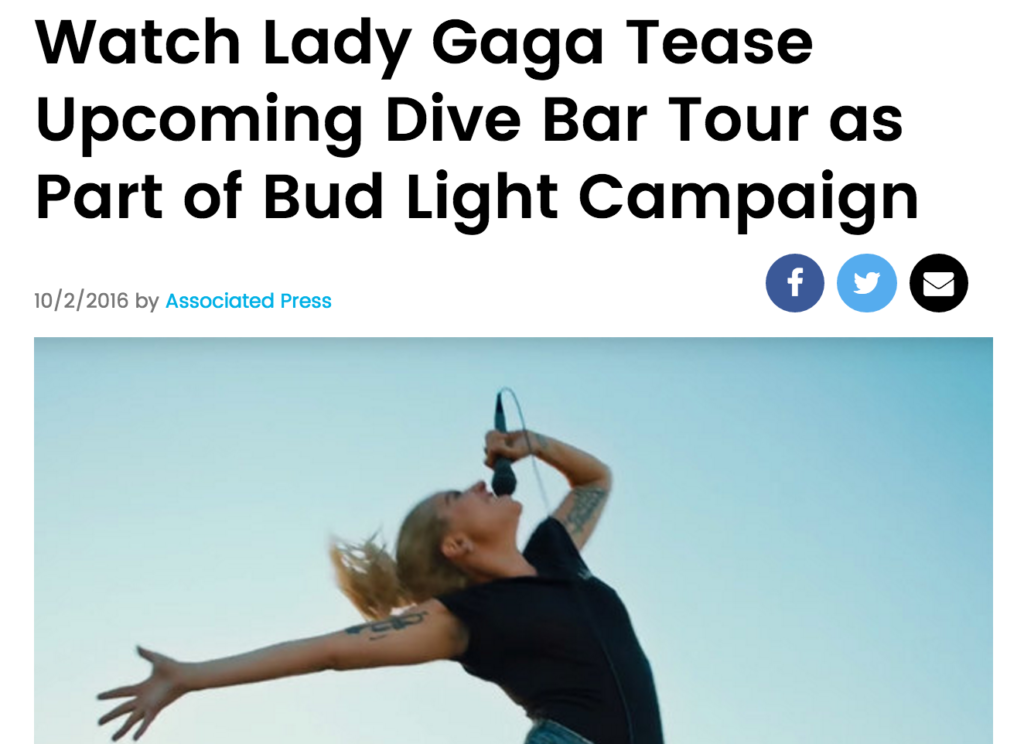 *All stats on YouTube videos as of October 31st