Rio Olympics Recap: What People Talked About Most

The torch has been extinguished and, just like that, another Olympics has come and gone. You’ll have to wait another two years for the Winter Olympics, or, like everyone else, you’ll wait four years for Tokyo 2020.

For now, we only have the games’ memories and their stats to remind us of its service as an usher of solidarity and athletic achievement.

Memories aren’t the lone takeaway from this year’s Olympics. What we’ve also learned, and will likely be heavily utilized for future events, is how valuable of a resource social media can be beyond its surface. I’m not just talking about things as simple as statuses, but social media as a platform for live streaming and exclusive content.

Social media’s versatility as a community platform continues to grow with each massive event. Let’s use Facebook as an example. Its video highlights allow it to act as a news network, while live, 360 videos make it stand out as its own broadcaster. It continues to maintain a strong sense of community, while still pushing exclusivity.

Judging by social media’s success this year, it’ll be really interesting to see how much it evolves by 2020.

People who spoke of Facebook’s demise have been greatly misled. Not only did it outperform every other social media outlet, they broke records and “achieved a new record of views and clicks for its own coverage of the Rio Olympics 2016.”

1.5 billion interactions took place from August 5th-21st, with 277 million people participating in the worldwide conversation. Although there’s no “apples-to-apples comparison from the previous summer games in London”, its 116 million posts and comments would lead one to believe the 2012 games were severely outperformed.

A lot to that has to do with the notable leap from 955 million monthly active users to a staggering 1.81 billion users today. But a jump in active users is far from the one reason why Facebook crushed their Olympics coverage. Here’s a few factors cited by Mashable:

Their case for winning social media at the Olympics was exemplified no better than Michael Phelps forgoing NBC and choosing Facebook to announce his retirement. That video has received 3.9 million views and counting. However, there may have been incentive behind this:

According to the Wall Street Journal, “Phelps is one of 140 video creators Facebook pays to create live video on the social network.”

But Phelps wasn’t alone in his Facebook success. Notable athletes like Jamaican track star Usain Bolt and Brazilian soccer star Neymar earned their fair share of attention, but it was someone on the outside looking in that earned top honors, in terms of the most engaged post: 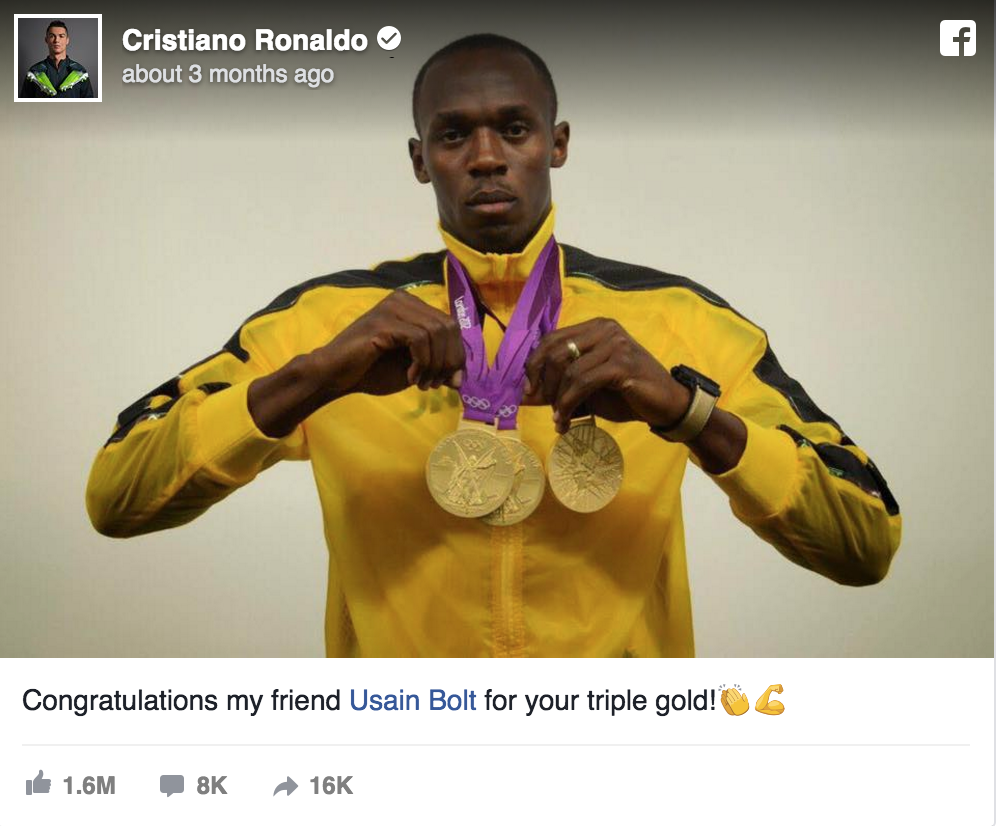 That post was made by Portuguese soccer star Cristiano Ronaldo, who chose to forgo the Olympics. His popularity plus Bolt’s created a perfect storm of activity, with fans of his, of Bolt, and of the Olympics overlapping and converging on his congratulatory post.

Twitter made searching the top moments for the Rio Olympics easily accessible to anyone who cared to view. If you were to search, you would know that “187 million tweets were sent about the Games and in total, this led to 75 billion impressions of Tweets about the Rio 2016 Olympics games.”

Twitter has always served as the best platform for random brain droppings. It’s the most serviceable social media outlet to be a part of a larger community and for random, incessant thoughts to be made without repercussions. If you were to make 30 Facebook statuses during the course of a game, it’s likely you’re going to get un-liked or un-followed by a bunch of friends.

If you do the same on Twitter, however, you may find yourself part of a larger conversation. You may actually discover new communities to be a part of that also shares in your interest of live tweeting.

About a week ago, I wrote about the insane amount of attention Michael Phelps’ received due to this being his last Olympics. While I was right about him being the most mentioned athlete (Usain Bolt was 2nd and Neymar was 3rd), none of his races were a top 3 moment, in terms of Tweets per minute.

That honor, twice, belongs to Neymar’s key goals en route to Brazil’s thrilling 2-1 victory over Germany. His regulation goal off a free kick was the third most tweeted moment, while his penalty kick to seal the game took first prize. Usain Bolt’s Gold Medal-winning 100M run came a close 2nd.

There are few key factors involved here. This was Brazil’s chance to, shockingly, win its first ever Gold Medal in soccer, as well as their first chance to redeem themselves after their devastating 7-1 World Cup loss to Germany. It’s safe to say many people tuned in solely to see how Brazil would react AGAIN to another humiliating loss that has become considered one of the country’s greatest tragedies.

Despite this, soccer finished 2nd in the most mentioned events. The top honor went to swimming, while third went to track and field.

Surprisingly, there’s been no sight of gymnastics anywhere. That could be due to the collision course that took place between Brazil and Germany. It was expected that Phelps and Bolt would steal all the headlines, but nobody expected those two teams to meet so soon after the 2014 World Cup.

But not all is lost for gymnastics, namely for the U.S. squad that dominated and specifically for Simon Biles who was the biggest winner of them all. She took home 4 Gold Medals, a Bronze, and the most retweeted athlete tweet:

proof : had to do a retake bc I thought we were taking a picture then he kissed me instead ❤️ pic.twitter.com/rld33V14qe

Second belonged to the Japanese men’s gymnastic team celebrating their Gold, while third went to Bolt rightfully boasting about his unreal career achievements. Out of the top 10 most retweeted athlete tweets, Biles actually had four of them (#1, #4, #7, and #10). Bolt was a close second with three (#3, #6, and #8).

Argentinian tennis star and Silver Medalist Juan del Potro took two spots (#6 and #8). How intriguing that 9 out of the top 10 most retweeted athlete tweets were made by only three athletes.

Nine of those tweets had to do with winning, whether it was by the tweeter or a congratulatory tweet to another athlete. The only outlier was actually the top tweet of them all, a short video of Zac Efron sneaking a kiss on Biles, who had previously admitted to crushing hard on the movie star.

So the formula to success is obviously:

Now that you have the equation, it’s time to start planning for 2020! I’m sure there will be no limit to the amount of Mario-infused branding tweets.

Most Talked About Athlete

In terms of volume, the nod goes to Phelps. In terms of peak, however, the tallest platform belongs to Bolt, whose 100M Gold Medal run on August 15th featured the most times a single athlete was mentioned.

Phelps peak was August 10th on the night he won the 200M butterfly over South African rival Chad Le Clos.

What I found most interesting with these stats was the interest by region. Clearly, Phelps dominated North America, including Central America, but almost everywhere else in the world was talking about Bolt:

As an American who is constantly bombarded with Phelps propaganda, it’s interesting to see how the rest of the world views him and the sport of swimming in general. While here it’s pushed as the premiere event of the Olympics, almost everywhere else in the world doesn’t look at it that way.

All of Europe was interested in Bolt, with the outliers being Portugal by a close margin, and Hungary, whose interest in Phelps was likely because of interest in Hungarian swimmer, Laszlo Cseh.

Surprisingly, Australia, who had a huge showing in the pool, displayed far more interest in Bolt than Phelps.

Only one country showed a majority interest in Neymar over Phelps and Bolt. We’ll let you guess which country that could possibly be.

Ryan Lochte, in green, also earned some attention, albeit for all the wrong reasons: