As history has proven to us time and time again, humans have an insatiable appetite for making life easier for themselves, often to the point where we harness the intelligence and brawn of others for our benefit.

But even the Universe has its limitations. Not allowing that to stop our progress, however, we created a new one: A digital one, where the possibilities have no limit. You’ve seen it in factories, with humans being replaced by far more efficient machines. Now we’re experiencing it in the era of making customer service more efficient.

Welcome to the Future, narrated and coordinated by Artificial Intelligence.

Since Deep Blue, a supercomputer with surely no intention of world domination, defeated Garry Kasparov, the world Chess champion at the time, humanity has marveled at A.I.’s extraordinary potential. As a result, humans couldn’t help but develop and advance it more, pushing its capabilities further and further.

This trend of A.I. puffing its motherboard out at the intelligence of lowly humans was featured for all to see on Jeopardy!. The streak of human victories was snapped when ‘Watson’ entered the fray and destroyed the likes of noted Alex Trebek foil, Ken Jennings.

Deep Blue and Watson are examples of artificial intelligence’s capabilities. They act as humans, but only at specific subjects; Deep Blue’s sole purpose knowing how to win at Chess, while Watson’s was knowledge aggregation.

The small-scale A.I. we experience daily has a sole purpose of aggregating customer info and assisting them with orders. Thankfully, they’re not sentient so we can avoid embarrassing scenarios like these:

The previous objective of artificial intelligence improvement was to get it to the point where it would pass the Turing Test. It should respond and act like a human would. The result of these goals has led to breakthroughs in A.I. practicality, where it needs to be just human enough to carry on a simple conversation.

These useful breakthroughs come in the form of a ‘Chatbot’, an artificial intelligence program mainly used for commercial purposes. The logic is that online customers will have an improved shopping experience if they have a salesperson accompanying them, rather than if they explore the store on their own.

Facebook has already taken advantage, with over 11,000 companies using Chatbots on its Messenger service. Companies such as 1-800 Flowers, as well as the Weatherman app ‘Poncho’, are among them. 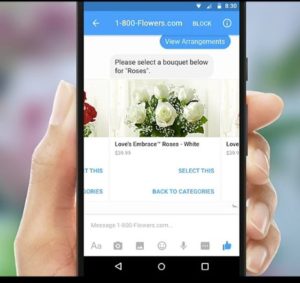 1-800 Flowers offers customers the opportunity to place an order. The Chatbot will interact with you, asking for your name, card message, recipient destination, and billing info, all under the illusion of speaking with an actual representative.

Ask ‘Poncho’ how the weather is and you’ll be greeted with a timely response of whether there’s sun or showers in the present or near future. You’ll never have to momentarily look out a window again! Welcome to the world of modern day convenience.

As if Chatbot apps couldn’t be more helpful, there is one currently in development that’s designed to help make you richer. BOND acts as your personal financial advisor, instructing you on better money management and budgeting. Advice on refinancing your loan, stock tips and finding a credit card with less interest are dispersed at will, all without the meddling and fallibility of a human being.

But not everyone agrees that Chatbots are as useful and reliable as they may seem. They can be taken advantage of. IKEA had to abandon its website Chatbot after 10 years, simply because they made it too human. Customers were excited, but for all the wrong reasons. 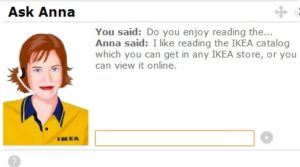 As the Chatbot’s responses became more human, the more vulgar the questions became. Around 50% of the questions asked were sex related, because we’re humans and we can’t have anything nice.

Chatbots, for better or worse, are the way of the future, and we’ve already experienced an early offshoot of it for years on the phone. Simply yelling ‘REPRESENTATIVE’ at your computer may not work (Perhaps that’s in Beta stage), but benefits, such as accessibility and convenience, still outweigh the drawbacks.

Plus, as noted at the beginning, technology has a way of evolving to further convenience and lessen frustration. There is a beneficial purpose behind this innovation, and with roots firmly dug into the dirt, we should expect this massive industry to only grow.

Here at One Twelfth, we enjoy looking into the future and being on top of new technologies and mastering them. We do this because of the intrigue, but, more importantly, because we want to provide the best possible service to our clients. You can reach us at https://one12th.io/#contact-us.