3 Ways Virtual Reality Can Play a Role in Digital Marketing

Finally, we’ve reached a pivotal landmark in mankind’s evolution where this will become a natural, totally normal occurrence:

But don’t be so quick to judge. Because that cyborg catching invisible butterflies and then releasing them after a mindful observation is immersed in the growing phenomenon that is virtual reality.

While mainly used for gaming purposes at the moment, virtual reality is already integrating with useful applications in the workplace. Here’s a small sample of what it can provide in that type of setting:

That’s one way to add excitement to your Monday. The future looks ridiculous from the outside, but on the inside is an engaging, interactive, fully-immersive experience that is incomparable with anything we’ve ever experienced……Well, besides the reality we’re living in of course.

Naturally, new technology will lead to new applications for everyday use, especially as a means of turning a profit. Social media would find it to be one of the most valuable mediums in reaching its customers, as advertisers in the digital world clamor for new ways to engage with their audience.

Just look at how far social media advertising has come from. No longer perceived as a simple task performed by some hungover intern, millions upon millions of dollars in company budgets have been allocated by marketing departments to invest in social media, rather than the traditional TV, radio or billboard route.

Now we have virtual reality, which will surely be used to create a new form of advertising. We’ve already come a long way in terms of engagement, but virtual reality will open up new avenues and benefit both digital marketers and their audience like never before:

Remember that .gif showing how virtual reality could work in the workplace? Let’s use that type of experience as an example of how you can interact with an advertisement.

Take a company like Expedia. They want to advertise a deal on vacations to the Caribbean. Current mediums allow as much as clicking and dragging on pictures, even 360 degree views of the area, but you’re still behind a computer screen just looking at pretty pictures.

Virtual reality places you there. Strap on the headset and you’re suddenly surrounded by the sand and ocean. Plug in your headphones and you can hear the lapping of waves and the obnoxious songs of seagulls. Everywhere you turn your head, you are getting the full experience of being at the beach.

Social media advertising is a means of eliminating the disconnect between businesses and their customers. In terms of customer service, its only equivalent is someone simply walking into the place of business and asking their question. In terms of advertising, however, virtual reality stands tall among the crumbling pillars of television and radio.

Or try it out with a product. When you go to a store and there’s a loose item you’re thinking about buying, you try it out first, right? If you sell a product online, wouldn’t you want to use virtual reality so that the user may try out the product right from the comfort of their home?

People shop online because it’s easy, but one of the main issues is that they don’t always know what they’re getting. This barrier between customer and product can potentially be removed if the product is put in the user’s hands with the assistance of virtual reality.

The current shopping experience online is convenient, but, like everything else, there’s room for improvement.

Let’s consider shopping in virtual reality. In fact, let’s go a step further and implement the 3D technology that’s been discussed. Imagine being able to swipe through a 3D catalog of clothes, not having to wait on load times or websites that aren’t mobile-compatible.

Not only would you be able to get a clearer, more fluid look at the item you’re searching for, you’d be able to see the items in real size and form, which, according to this study by the Ericsson ConsumerLab, is the top virtual reality activity that interests smartphone users worldwide: 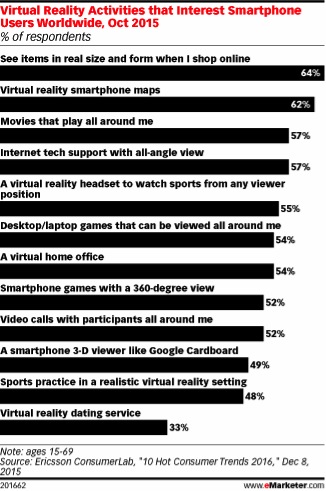 It all falls under the umbrella of customers wanting a more immersive, realistic shopping experience without the hassle of driving to the mall. Because there is so much at our disposal on the internet, consumers are going to want more and when convenience is gifted, the only thing they’ll want afterwards is more convenience.

Providing a full, convenient shopping experience will bode well for your company, especially with the extreme likelihood that businesses will hop on the trend if the success of virtual reality pans out. It’s better to invest now when it’s new, as opposed to later on when every company is going to be doing it.

Ushering In A New Era of Display Media

Where the money goes, the world follows. So long as virtual reality keeps picking up traction, it’s not too outlandish to believe that we’ll be seeing more and more of the devices as they become more accessible and cost-friendly to the general consumer.

It’s alright not to believe. After all, the same thing was likely said by detractors during the dawn of every popular form of communication we have now. But this isn’t a flop like Nintendo’s Virtual Boy, where a limited amount of games were made available for a first-of-its-kind contraption riddled with faults and a display screen that framed everything in blood red. 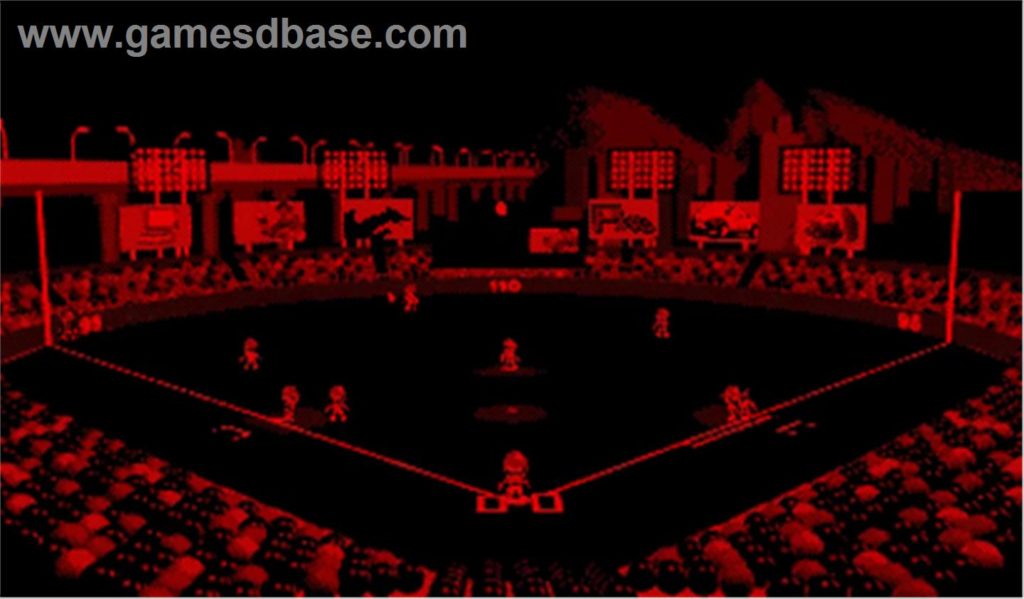 Humanity’s curiosity has long been piqued by the idea of virtual reality. Why else do we play video games but to lose ourselves in a different reality? One where we’re the Pro Bowl quarterback or the special ops agent tasked with taking down a swarm of zombies?

Now you can. In case you’ve been living under a rock lately, people have already been immersing themselves in first-person shooter games with hilarious results:

Soon it won’t be just for video games. There is a market for this technology and it’ll likely make the jump to widespread use, not for entertainment purposes like the example above but for practical purposes, such as putting yourself in a meeting on the other side of the country.

Ideas like this have already been implemented into social media. I posted in a blog earlier this year about an interactive M&M’s ad I came across that put the user in each character’s room. Going even further, they implemented a 360 degree view that allowed the user to scan all around the room.

Now imagine doing the same but actually being inside the room and being able to walk around. At the moment, we may be looking too far into the future. The only current virtual reality examples we have to work with are a few simple shooting games, which nonetheless are still terrifying.