How M&M’s Just Raised the Bar in Facebook Advertising

About two weeks ago I wrote a blog about Facebook’s new ‘Canvas’ advertising. I was stunned with how immersive it was and felt it would signal a trend towards more customer-friendly experience.

These experiences would involve users doing a lot of clicking and scrolling, but I never could have imagined it would evolve into a Facebook ad from M&M’s I came across earlier this week.

In case you’ve lived under a rock for the past 15 years, M&M’s commercials generally feature anthropomorphic M&M’s (Usually a surly red M&M and a dumb but lovable yellow M&M as his partner) engaging in conversation. The two will run into some sort of conflict, we all laugh and buy M&M’s.

Because of their success, the campaign has branched out. There’s now a sultry green M&M (Yes, that did feel weird to write) featured and a Brown M&M seemingly for the sake of adding a new character. They’re so identifiable that they’re individually featured on the M&M’s website.

Not only did M&M’s provide their animated spokespersons with character traits, they made them roommates. With rooms you can explore. On Facebook.

Needless to say, when I came across the ad we’re about to dive into, I was hooked immediately. It wasn’t the M&M brand that grabbed me (It helped), but the intrigued digital marketer exploring this new world of advertising.

Here’s what I was introduced to at first: 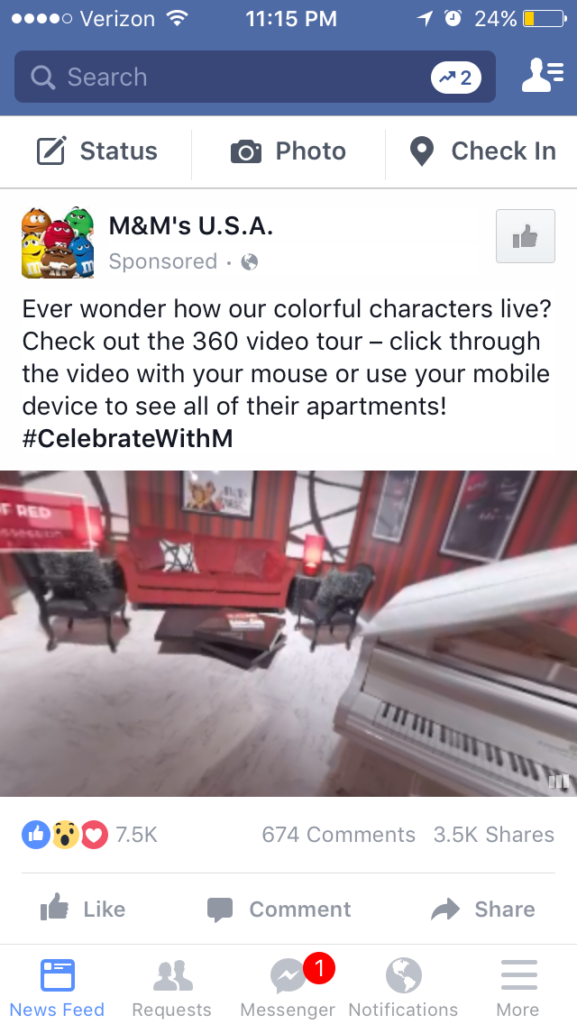 What an ad to promote! I was hooked right when I read ‘360 video tour’, which M&M’s strategically inserted into the copy to interest users who had no idea, like myself, that it was possible not only in advertising, but on a mobile.

I wasn’t even directed to their website. I was kept on Facebook and given a full, seamless 360-degree view of each room, along with easy access and direction to the next. I ran into no sort of buffering or glitches. It was a blast going through each room and noticing all the little things the designer placed to add a touch of personality.

I loved what M&M’s did with this, but little did I know that this has actually been done before! Although they weren’t done for advertising purposes, it has been done for informative news pieces.

Such as this one allowing users to navigate an ABC news camera of a parade in North Korea.

This one gives users the experience of practicing with Real Madrid.

And this one where you actually run through a tunnel onto the field with New Orleans Saints!

Despite those being live shots, they’re still accessible months later so you can relive the moment & spot any intricacies you might have missed.

What I’m interested in now is when we’ll start seeing more brands debut their own 360 ads like M&M’s. With limitless possibilities, it seems that every company from every industry could create their own immersive ad experience that digs a little deeper than Canvas.

Or they could just go the routes the Saints and ABC News went by simply documenting what they were seeing and leaving it at users’ disposal for the future. M&M’s ad definitely took a lot of time, effort, imagination and money, four things that not many medium-to-small businesses possess.

What they do possess, however, is a service or a product.

Take a roofing company for example. If I’m a small or medium sized roofing business looking to get my name promoted, I’m going to the middle of the roof, shooting 360 footage of roofers diligently working on various activities, and posting it.

Just like that you have an intriguing, interactive experience that gives users a POV shot into the life of a roofer. What seems mundane when looking up may become a lot more interesting when you’re witnessing a roof being tiled.

Let’s use another small business as an example, such as a newly opened restaurant. The possibilities are endless! Take a 360 shot behind the grill and see how your order transforms from ingredients into a delicious plate. Potential guests will get a kick out of scrolling through the video and seeing how the kitchen operates.

In all of these examples, transparency is the common theme that accompanies the improved customer experience.

Fans getting to see what happens before an NFL teams runs through the tunnel? A rare look at a North Korean parade and its attendants? A practice with an elite soccer club? These are all examples of transparency channeled through insider access. Without social media, we would have never been able to access it.

360 views place us right in the action and it shouldn’t come as a surprise if more advertisers start taking advantage with their own immersive experience for improved customer relations.