The 5 Biggest Marketing Disasters of All Time

Marketing can have its fair share of challenges. When you’re trying to generate attention and awareness to your cause or product, you’re willing to go to extreme, and sometimes desperate, lengths to do so.

It’s boom or bust most of the time for marketing managers. Sometimes the promotion works better than planned and your entire company is rewarded through higher profits thanks to you, other times it doesn’t and the entire ire of the company is on you for not drumming up business.

Other times, as in the case of the five companies featured here, there are promotions so shortsighted that you wonder how they were approved in the first place.

1. Hoover Just Gives Away Free Plane Tickets, Everyone Gets Fired

Here’s a good idea to get your company some attention: Offer free airline tickets to customers who buy at least $100 worth of your products!

Here’s a good idea to get fired and make your company lose a lot of money: Offer free airline tickets to customers who buy at least $100 worth of your products!

The British Division of the Hoover Company had a surplus of washing machines and vacuums and needed to clear out some warehouse space. In order to clear out the surplus, Hoover promised two round-trip tickets to Europe, and eventually tickets to the United States, to anyone who bought at least 100 pounds of Hoover products. 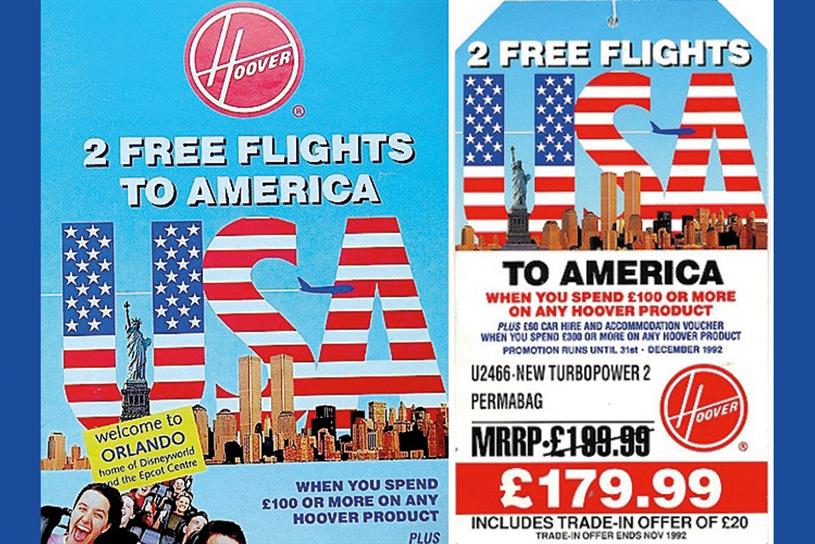 Wouldn’t you know it, a lot of people saw how absurd the offer was and started buying the hell out of Hoover vacuums and washing machines, and Hoover lost a lot of money because AIRLINE TICKETS ARE WORTH A LOT MORE THAN VACUUMS AND WASHING MACHINES.

The managing director, vice president of marketing, and director of marketing services were all fired, Hoover lost almost 50 million pounds and the British Division of Hoover was forced to sell to the Italian manufacturer.

2. Red Lobster Offers All You Can Eat Crab, Immediately Regrets It 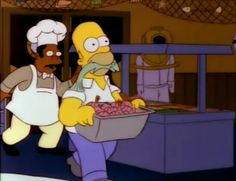 In 2003, the CEO of Red Lobster decided to unleash the stunt that would satisfy the limitless gullets of American patrons and put an expiration date on her tenure at Red Lobster. That stunt was the All You Can Eat Crab Legs promotion.

Compounded by Alaskan Snow Crab prices already being at an all-time high, the restaurant experienced massive losses as patrons wolfed down leg after leg after leg of delicious, buttery smooth crab meat; $3 million in a single quarter to be exact.

If it wasn’t bad enough that they lost money every time a customer ordered more than half a dozen, the average customer was eating AT LEAST TWO DOZEN every sitting. Patrons would just sit for hours and hours in their booth doing their part to consume a species to extinction.

Thankfully, the stunt was ended before that could happen. 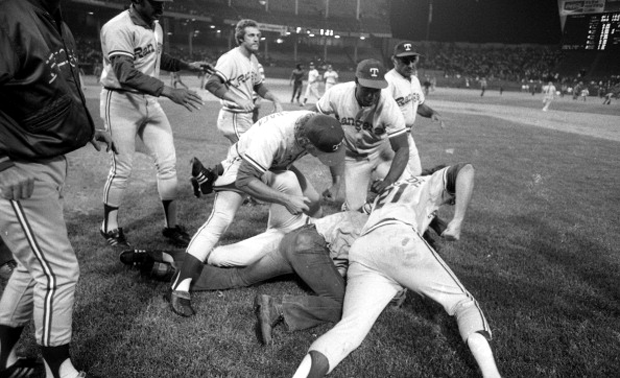 First of all, let’s just absorb the promotion: Unlimited Ten Cent Beer Night. Those five words are mostly innocuous by themselves, but put together creates a whirlwind of rage-fueled inebriation that would cause mass devastation and hysteria.

And it was at a baseball game; a game between the Cleveland Indians and Texas Rangers, to be exact.

First, a little background. To be fair to the promoters and organizers, this wasn’t the first time such an event had occurred at Cleveland Stadium as the team actually held a Five Cent Beer Night without any issues. So give credit to the people of Cleveland, they’re not all lushes when they can’t handle their alcohol.

The problem with Ten Cent Beer Night was that it occurred during a game between two teams that did not like each other very much. The Rangers and Indians had gotten into a bench-clearing brawl the week prior in Texas, and following the game the manager for the Rangers was asked if he was “going to take your armor to Cleveland?”

His response: “Naw, they don’t have enough fans there to worry about.”

This is where it all goes downhill. The Cleveland media, from print to the radio, fueled the fans’ animosity because of the comments and drew the ire of an entire city. That’s why it wasn’t surprising at all, or it shouldn’t have been to the organizers of Ten Cent Beer Night, that twice the number of fans (25,134) showed up.

Oh, by the way, there was no limit on how many beers can you buy. Sure you could only buy SIX BEERS AT A TIME, but you could just keep pounding and pounding away for the entire game. If you aren’t aware, baseball games usually last at least three hours.

When you blend cheap beer, boundless rage, sports, an early 5-1 deficit, & animosity together, you get what occurred that fateful June 4th, 1974 night. What I’m about to list are all actual events that took place:

And then things really started to get serious.

Cleveland had came back from the 4-run deficit to tie it at 5-5 in the 9th inning. With tensions already high, a young fan ran onto the field and tried to steal Texas outfielder Jeff Burroughs’ cap. When Burroughs tripped confronting the fan, the Texas dugout thought he was being attacked, resulting in the Texas manager and his team running out of the dugout ARMED WITH BATS.

Seeing the threat, the inebriated fanbase finally launched its full-on assault, with swaths of fans jumping out of the stands and surrounding the Rangers’, who were outnumbered and face-to-face with angry drunks armed with “knives, chains and portions of stadium seats they had torn apart.”

Seeing the even larger threat, the Indians ran out of their dugout, also armed with bats, and started attacking their own fans! Although the teams were able to retreat back to their dugouts, the fans had already stolen all of the bases, trashed the field, and needed police intervention. 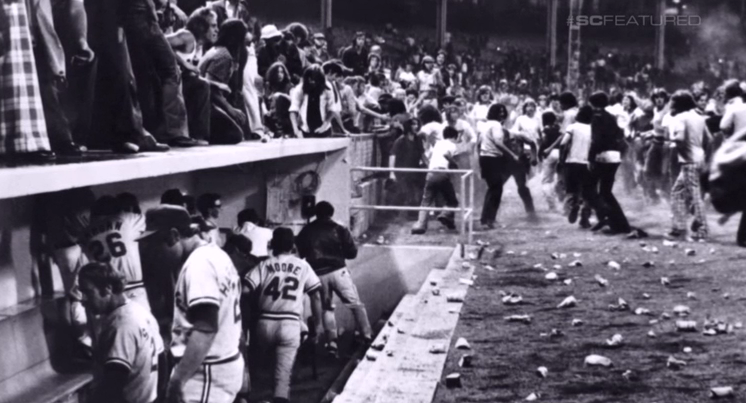 The game was called a 5-5 tie. The stadium would hold another Ten Cent Beer Night a month later, but limited fans to two cups per purchase.

4. Healthy Choice Gives Away Over 1,000,000 Frequent Flyer Miles to One Man Because of Cheap Pudding

Can we just stop mixing buying products and earning anything related to airlines? They don’t seem that work out well for the company.

For the consumer, in this case an engineer named David Phillips, however, it worked out extremely well.

In 1999, Healthy Choice promoted to consumers that if they bought 10 Healthy Choice products, they would earn 500 frequent flyer miles from the airline of their choice —1,000 miles if they purchased by June 1st. That’s certainly not as bad as giving away free plane tickets with a purchase, but it’s also exploitable.

David Phillips became an urban legend for what ensued. After thinking he could just buy $2 entrees, Phillips noticed a few aisles away there was a Healthy Choice product even cheaper at 90 cents. He filled his cart with enough Healthy Choice soup cans to feed an entire soup kitchen, but he was only getting started.

He then went to a local warehouse-style discount store and that’s where he found the products that would change his life: Individual pudding samples worth 25 CENTS EACH.

He bought every last one, then asked the manager where he could find more stores like the one he found the deal. The manager told him there were 10 stores in all, so David did what any sane person would do, visiting each one and buying up all of the 25 cent pudding samples they had.

He wound up purchasing 12,150 individual servings of pudding that cost him a little more than $3,000. Because he had so much, and was facing the dilemma of tearing off all of the bar codes in time for the approaching deadline, he recruited help from two soup kitchens and the Salvation Army to tear off the bar codes and then take all of the pudding to feed to the less fortunate. 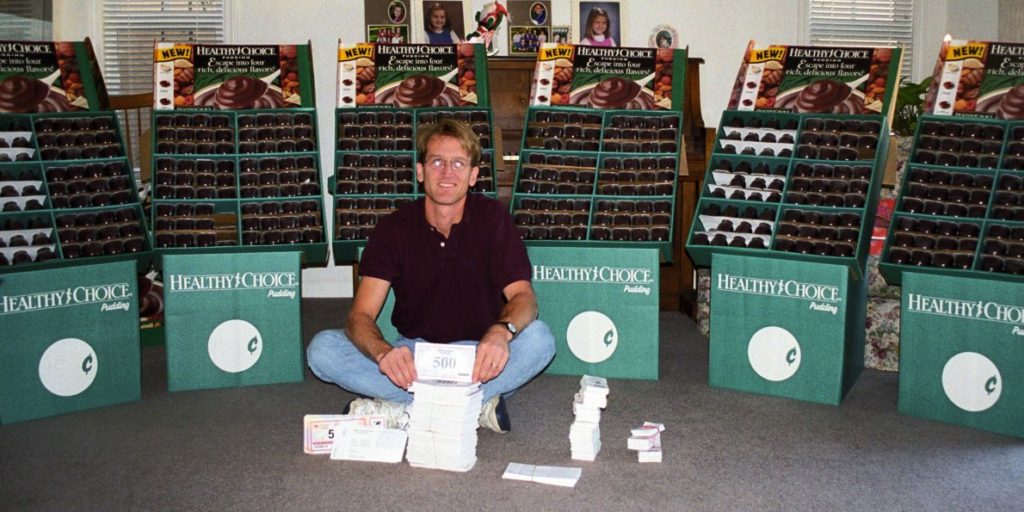 David got the bar codes in on time. Healthy Choice had no choice but to reward him, resulting in David acquiring a staggering 1,253,000 miles.

The circumference of the Earth alone is only 24,901 miles.

In the end, David’s stockade of pudding resulted in him “netting enough miles for 31 round-trip coach tickets to Europe, or 42 tickets to Hawaii, or 21 tickets to Australia, or 50 tickets to anywhere in the U.S.”

5. The United Way of Cleveland Shuts Down a City & Contributes to Two Deaths 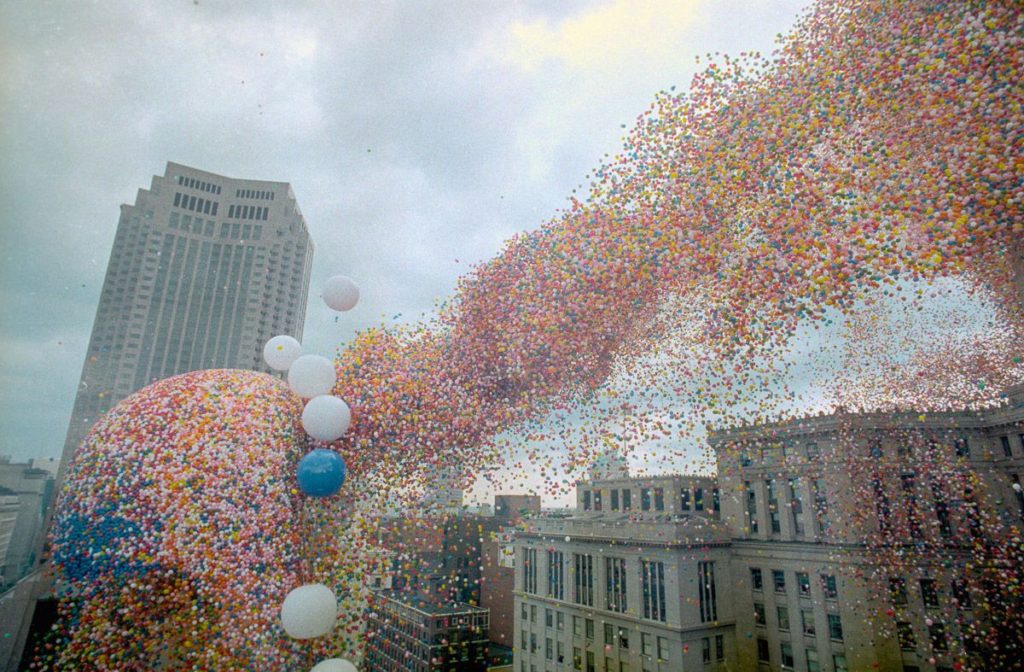 While the other marketing disasters here resulted in the firing of a few executives and some apologies, at least they didn’t inadvertently result in the deaths of two people.

Because that’s exactly what happened in the publicity stunt for Balloonfest ’86 in Cleveland.

Coordinated by Balloonart, the stunt was made to raise charity for the United Way, who had children sell sponsorships at the price of $1 for every two balloons. The plan would be to then take all of the balloons and release them over the city of Cleveland, creating an amorphous tsunami of helium orbs that would be a spectacle for all to see.

Oh, right, except for that one part where all of those balloons, all 1.5 MILLION OF THEM, had to go somewhere. Unfortunately for the city of Cleveland, they released those 1.5 MILLION BALLOONS from Cleveland’s Public Square and they simply drifted back over the city, Lake Eerie, and anywhere else in the area that could be inconvenienced by 1.5 MILLION BALLOONS.

Now back to Cleveland.

It was a complete and utter disaster. It literally shut down the city. Burke Lakefront Airport shut down for half-an-hour because of balloons, and traffic jams and accidents were abound due to drivers gaping at a rainbow blizzard of balloons blocking out the sun.

Oh, and two people died. Two fishermen were reported missing on the day of the event, and while rescuers were able to spot their boat the Coast Guard had difficulty reaching the area because of what they described as an “asteroid belt” of balloons.

The search was called off three days later, their bodies washed ashore a few days after that, and the United Way of Cleveland had to settle a multi-million dollar lawsuit with one of the wives of the fishermen.

Unsurprisingly, that wasn’t the only lawsuit to arise out of momentarily shutting down a city. The balloons also landed on a pasture nearly an hour away, frightening and permanently injuring the prized Arabian horses of a rancher. The rancher sued for $100,000 and settled out of court with the United Way of Cleveland.

In the days following the event, balloons were reported washed ashore on Lake Erie….on the Canadian side.

Still, it could have been worse. The United Way originally planned on releasing 2 million.

The Value of Focusing on LTV

Big Data and analytics are more than just buzzwords in modern marketing. Digital channels give us more data to work from than ever. We can see when a prospect opens an email, clicks a link or interacts with any of our content. All of that data produces a whole host of...

A world increasingly run on technology has beget a data revolution. Now it's a race to garner it, understand it, organize it and, most importantly, leverage it more effectively than your competitors.   Because data is everything now that it's available to...