As someone with an unhealthy obsession with sports, there is no social media platform that has embraced the multi-billion dollar industry more thoroughly than Twitter.

If you’ve ever used Twitter before, you’ll know that it’s a worldwide meeting ground for people with similar interests. What makes it different from Facebook, however, is that the information is concise to 140 characters and is constantly streaming with thoughts and opinions from people whose thoughts and opinions you value.

For example, as a fan of the 3-time NBA Champion Miami Heat, when I’m watching a game at home I’m interacting with fellow Heat fans also watching, as well as the Heat’s main Twitter account for replays and stats.

The NBA has had an interesting relationship with Twitter. Despite being inferior in popularity to the NFL and perhaps a few points above MLB, “Basketball’s following dominated other sports. Each basketball team on average has 60% more followers than the average football team, and more than twice the followers of the average baseball team.

In fact, it’s so popular that out of the 6 teams in the 4 major professional sports that have more than a million followers, 5 of them are in the NBA (Los Angeles Lakers, Miami Heat, Chicago Bulls, Boston Celtics, and Orlando Magic). The other team are the well-known New York Yankees.

How’s that for eye-opening? The world-renowned baseball team that ESPN can not stop talking about, whether they’re good or bad, only has a few hundred thousands followers more than the Orlando Magic, a middling NBA team that hasn’t been relevant in over 5 years.

I think this can be attributed to four factors:

As opposed to the NFL and MLB, who have strict copyright policies on their videos, the NBA allows much more freedom, and you can easily find highlight video compilations from around the league.

We took a deeper look into the teams, not just in the NBA, that are absolutely crushing it and worth a follow. 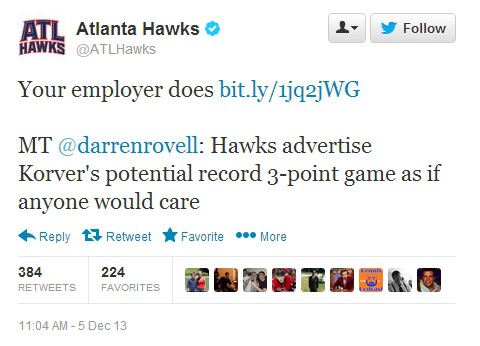 Interest in Atlanta’s basketball team around the league is tepid at best. Even the citizens of Atlanta have had trouble making it out to games, sometimes even resulting in bombastic cheers embarrassingly focused for their more popular opponent with notable players from that teams’ fans.

It was their Twitter account, which pumped out gems like the one you see above. It was wildly creative, interactive, engaging, smart, witty, and topical, including going above and beyond for tweets like this: 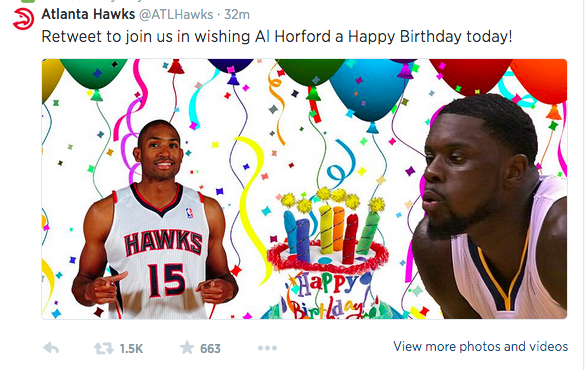 That’s just a birthday tweet! While any other team would have posted a simple ‘Happy Birthday’ message, the Hawks’ Twitter account is topical and generates a lot more buzz and reaction by including Lance Stephenson, who had made news earlier that week for blowing in an opponent’s ear.

Check out this interview with the social media manager for the Hawks, where he provides plenty of insight into how he does it and why it’s so successful: http://bit.ly/1KiuVLA 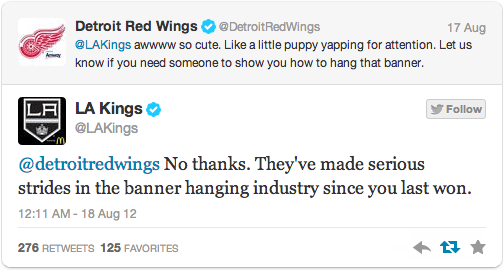 Sarcastic, hilarious, and quick-witted, the Los Angeles Kings twitter destroys hecklers (such as the poor, deserving team above) on a daily basis and finds time to create quality tweets without somebody being at the brunt of the joke.

Actually, we’re just kidding because this team cannot stop embarrassing people who are ignorant and unfortunate enough to tweet them: 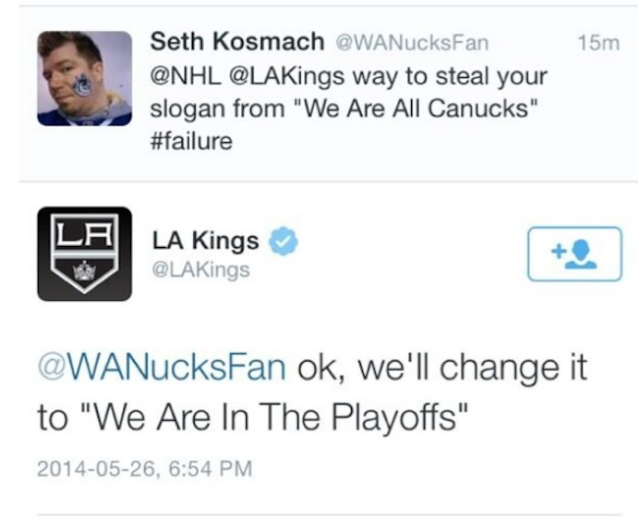 GOODNESS. Not even famed talk-show host and comedy writer Conan O’Brien is safe from the disrespected, sarcasm-fueled twitter fingers of the Los Angeles Kings account!

Once again, someone was wise enough to conduct an interview with the account’s community manager: http://bit.ly/1Qd8Hz4

Our favorite tweet: As they’re wont to do, the Philadelphia 76ers interact with another NBA team and come up with this classic, witty response. 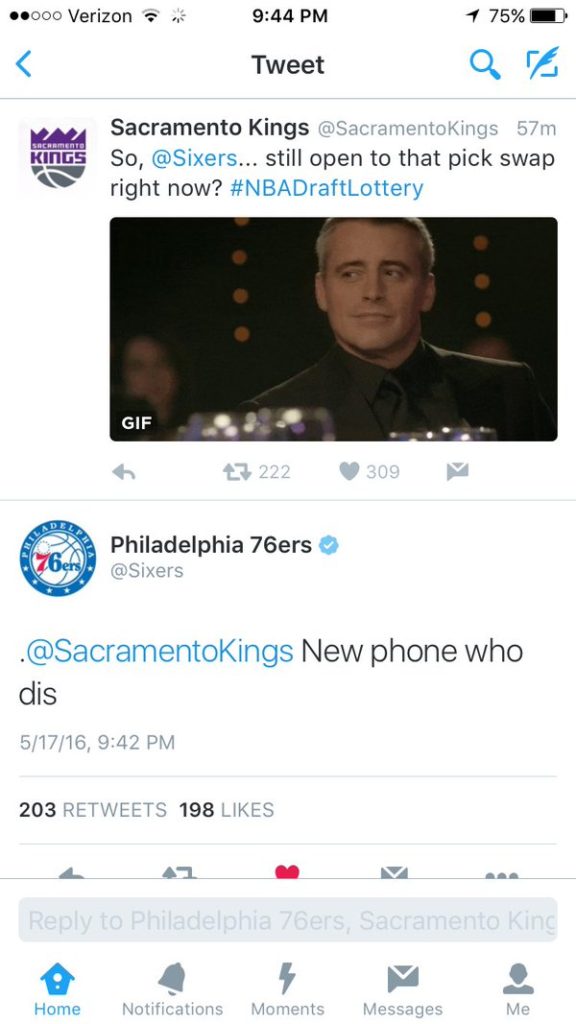 I’m a huge Heat fan, but even I couldn’t resist giving the Philadelphia 76ers account a follow because of how engaging, creative and genuinely funny it was.

The tweet above is just one piece of evidence of how quick and in-tune with pop culture the Sixers’ community manager is.

Our favorite tweet: The 15-3 Trail Blazers are tired of playing in a competitive Western Conference, while the Eastern Conference features teams with losing records capable of making the playoffs. 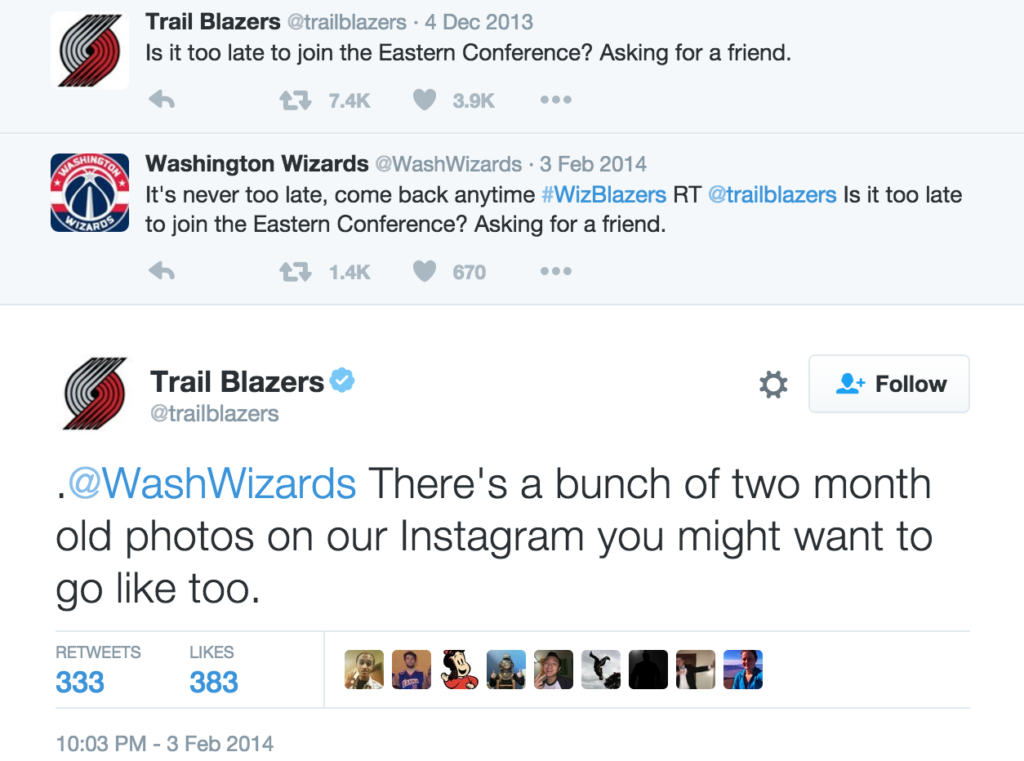 Ranked by Complex.com as the NBA’s top Twitter account, they claim that “Watching a Blazers’ game on Twitter is almost as fun as it on TV.”

While they do create excellent tweets like the one pictured above, they do specialize in creating on-the-go content throughout a game. Just check out this progression, pointed out by Complex in the article linked above, of tweets from the same game:

These are all gifs, as if the community manager has an entire folder waiting for these types of plays to develop.

As noted above, Twitter and the NBA have a long-standing relationship, starting with the very first team to sign up for Twitter being the NBA’s Sacramento Kings, and the social media platform has become more popular with basketball fans than of other sports. With the constant stream of information provided by Twitter, it allows for game updates without cluttering timelines and room for creativity.

Portland’s team has taken advantage of that more than any other.

Our favorite tweet: The Columbus Blue Jackets speak on behalf of every NHL team about the lack of attention paid to them by ESPN. 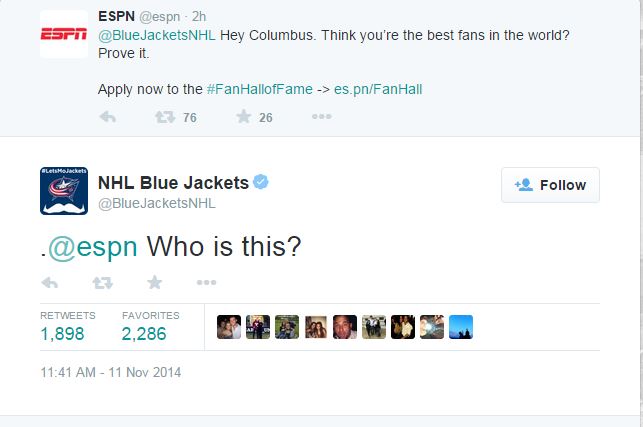 Without a doubt, the NHL, in terms of the four major professional sports leagues in America, ranks last in terms of interest and attention from outlets such as ESPN. The lack of air time on the country’s largest sports network likely explains this interesting stat:

“Hockey teams were by far the most socially active on Twitter, tweeting 25% more than the closet competitors.”

The Columbus Blue Jackets have three issues with popularity: One, they’re in the NHL; Two, they’re located in Columbus, where the Ohio State Buckeyes command most of the attention; and Three, they’re not very good, recording one playoff appearance in its five years of existence. It shouldn’t come as a surprise then that “the Columbus Blue Jackets are the most socially active out of all sports teams, tweeting an average of 30.5 times per day.”

Despite these factors, they’re amounted over 236,000 followers, while following 1,362, over 88,000 tweets. They have more followers than six other teams, including the New York Islanders and 2006 Stanley Cup Champion Carolina Hurricanes.

We’re going to assume a few of those followers derived from that epic tweet above. It’s no secret that the NHL receives little attention from the self-proclaimed worldwide leader in sports. A study in 2012 showed the NHL accounted for only 2.7% of air time on ESPN, with college football, college basketball, and freaking GOLF actually receiving more attention. By comparison, the NFL led the way taking up 23.3% of air time.

By sport, the most-covered team for the NHL were the Pittsburgh Penguins, likely because of their star player Sidney Crosby, not their first-round playoff knockout, at 0.3%. The Kentucky Wildcats college basketball team received more mentions at 0.9%.

And this might be the most revealing stat of them all from this extremely in-depth research:

“The two most common words mentioned with “hockey” were, of all things, the first names of SportsCenter anchors Linda Cohn and Steve Levy. It truly doesn’t exist.”

If you’d like more research into why ESPN doesn’t hold hockey in higher regard, and why the Blue Jackets responded the way they did, read this fascinating article.