Last week, not many people outside of the area knew about River Bluff Dental or Walter Palmer, the lead dentist at the practice.

Today, he’s one of the most hated people across the globe.

Here’s how we got here:

Cecil the lion is well-known in the largest national park in Zimbabwe, noted for his beauty, leadership of six lionesses and 24 cubs, and for his lack of hostility to photo-happy safari-goers looking to get the picture of a lifetime. He has also had some human interaction, having a collar around his neck for GPS tracking.

That came to an end, however, when it was discovered that Cecil had been killed, beheaded and skinned. Although Cecil lived within the government-regulated and protected Hwange National Park, he was lured by a hunting group to stray away from the Park, where he could be shot by a bow and arrow.

This isn’t too uncommon in Africa. Hunters from all over the world will sign up for expensive hunting trips in Africa, in order to hunt the most exotic and dangerous animals on the planet. What is illegal, however, is luring an animal out of their protected park and then killing them.

As details began to emerge, the assailant was originally believed to be a Spaniard, but this was changed once the actual shooter was found. Along with two others who were a part of the company, and have already been arrested, it turned out that it was an American who committed the act that has caught a significant amount of steam on social media.

Once his identity was revealed, social media users sympathetic to an unsuspecting lion getting killed by a big-game hunting dentist took to their favorite channels to lambast and destroy the dentist’s name…

Here they are destroying his Yelp! page, which originally only had 4 positive reviews to a staggering 1,052 reviews, most of which are unsurprisingly negative:

Ouch. His YouTube video, originally uploaded in 2010, has also been targeted: 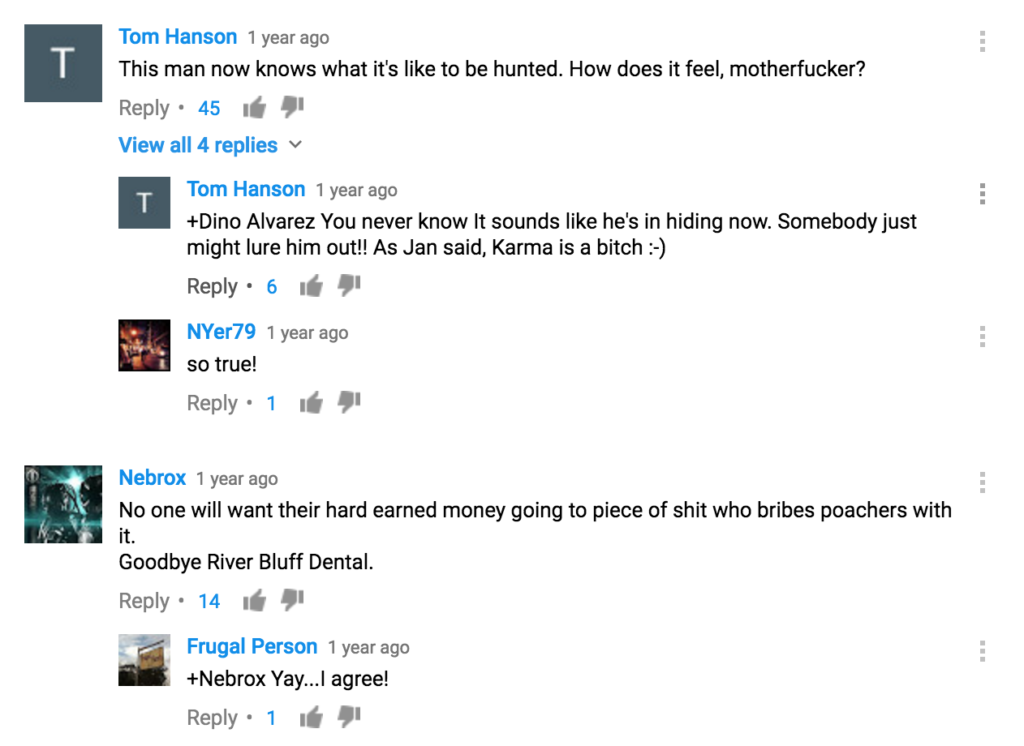 On Facebook, it seems that a page for River Bluff Dental was created, solely as a forum where the anti-Palmer community can destroy him again:

Everywhere you look, and everywhere you go, Walter Palmer’s head is being demanded, similarly to how he lured an unsuspecting animal out of its preserve to shoot it and take its head as a trophy.

This is the power of social media. Consider if this happened in 1995. There would possibly be a news story, but would it have gained so much traction if not for it being swept up in the waves of outlets like Facebook and Twitter, both of which feature trending news feeds?

There certainly wouldn’t be an online forum available to leave negative remarks for millions of users to see.

There definitely wouldn’t be fake social media pages created just to tarnish his name even more.

There also wouldn’t be a tool available where I could type in ‘River Bluff Dental’ and see thousands of people all creating their own personal vindication to tear apart a random dentist in Minnesota’s life.

But that’s the age we live in. News get shared, it gets a lot of attention, whips people into a frenzy and internet lynch mobs are created. It’s an extremely dangerous line to tread. Because while it does bring attention to certain issues, such as illegal poaching here, it an also ruin lives of those with no relation to the event that’s being shared.

Most notably, Reddit, a social community forum where millions congregate to discuss issues, thought they had a suspect pegged during the Boston Marathon bombings. This completely baseless idea earned enough recognition to be picked up by news outlets and law enforcement.

What was the problem with this? The ‘suspect’ they created out of almost nothing was not a suspect in the slightest.

And how did this spark create a raging fire of news vans and social media outrage?

“Some Redditors decided that Tripathi indeed matched the photos of the suspects released by the FBI. Tripathi’s name and his supposed tie to the bombings eventually popped up on Twitter and from then on, there was no stopping the moment of speculation that he was ‘Suspect 2.'”

Missing for a week? Brown guy? Well, case closed we found our man. And wouldn’t you guess it, Reddit was right all along and they eventually found and detained Tripathi.

Just kidding. He was found dead in a river four days after the actual suspects were killed/apprehended. The cause was said to be suicide. Reddit went in with the noble intention to play psuedo-police officer and FBI agent, but ended up dragging a grieving family with a missing son into a media circus that resulted in strangers accusing their missing son of being a terrorist.

Social media is an incredibly volatile, dynamic platform that could bring out the overwhelming good, such as the ALS Ice Bucket Challenge raising hundreds of millions for ALS research, and the overwhelming bad, as you just read, of common citizens who want to play a role in something bigger than themselves. They do it because it’s their way of contributing without having to do too much.

UPDATE: River Bluff Dentistry has been closed. There are stuffed animals outside the door.

← The Most Important Social Media Stat You'll Need How Often Should you Post on Social Media? →