Social media has served as the most efficient outlets between companies and their clients, leaving behind the tired, frustrating model of having to go through call centers and apathetic phone representatives to resolve any issues.

With social media, clients can simply leave their review or complaint on a brand’s page. This is not only easier to get in contact with the company, but it also allows other clients to know what type of company they are dealing with.

Twitter, in terms of interacting and engaging, has become the ideal social media outlet for brands. It’s the most effective way of direct communication between a brand and its fans, with “42% of Twitter users learning about products and services via Twitter, 41% providing opinions about products/services, and 19% seeking customer service.”

An even more significant stat is the fact that “49% of monthly users follow brands or companies, compared to just 16% of social networks overall.

It’s also the go-to social media outlet for those who live through their phones, too, as “63% of Twitter users access social networks via phone, compared to 34% of social networks as a whole.”

It’s the social media for brands and their fans, and few brands utilize Twitter better than these four do.

Go Pro has the benefit of being in a market that embraces adrenaline rushes and adventure, meaning that their marketing department hardly has their work cut out for them. It only takes a few incredible point-of-view videos taken from extreme locations to attract some interest to your brand, but Go Pro takes it another step further.

Rather than posting their own videos or pictures, they invite fans of their camera to make content for them. As a result, Go Pro’s Twitter feed is mostly videos and photos from fans who want to show off their Go Pro escapades.

Photo of the Day! Mike Sebastian calls this “the moment of truth.” pic.twitter.com/wCmABD2pb8

Photo of the Day! @chaselife and Justin Whiting ripping around Moab. pic.twitter.com/s1abrByxt1

It’s fun, engaging, interactive, and Go Pro was even smart enough to make a little competition out of it with their ‘Photo of the Day’ competition.

Summer’s finally here! Time to drop the kids off at the pool. #firstdayofsummer pic.twitter.com/3OpPBsB1Bs 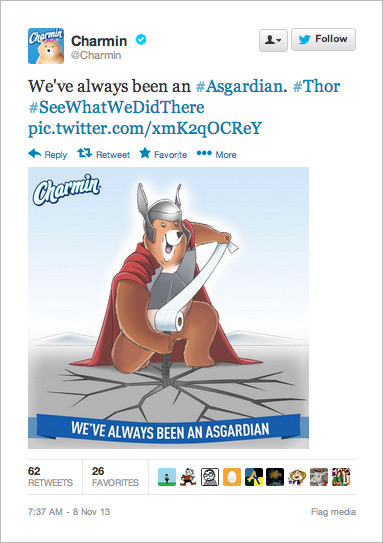 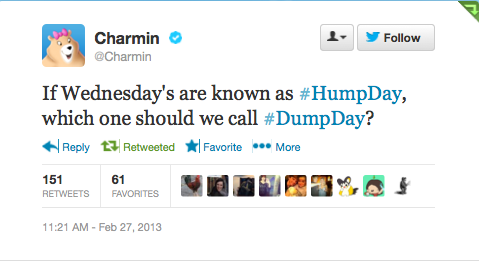 Oh, we thought he asked for the “TP” reports. Our bad. #FunAtWorkDay pic.twitter.com/rHbrZ7QhAM — Charmin (@Charmin) January 28, 2015

Charmin’s entire twitter feed is essentially dedicated to creating hilarious poop-based puns and leading its continuous ‘Tweets from the Seat’ campaign to interact with fans. They utilize their mascots to their fullest advantage, placing their bear, and sometimes his whole pooping family, into many bathroom-related situations and at the focal point of every poop-pun you could imagine.

It’s childish, ridiculous, borderline tacky, and I can’t get enough of it.

When it comes to running an official sports franchise account on Twitter, nobody does it better than the guys at the Atlanta Hawks.

They’re the perfect mix of creativity

We have a special message for our fans…with a little help from @Spotify: http://t.co/laYWhZkXoTpic.twitter.com/dlKstvOkpk — Atlanta Hawks (@ATLHawks) February 3, 2015

We totally have these guys right where we want them. pic.twitter.com/ejkkE19yVL — Atlanta Hawks (@ATLHawks) February 3, 2015

And, most importantly with any sports franchise, trash talk:

It’s a great look for a team with the 21st ranked attendance in the NBA to actively pursue attention off the court, even if the team is playing well. As opposed to most other franchise accounts which generally post game recaps, discounts in the team store, etc., Hawks twitter makes it a point to be as creative as possible, and to playfully interact with their fans and even opposing teams.

Give Denny’s credit as the brand that knows users and trends better than any other brand. It would not come as a surprise to find out the account was run by a 17-year-old kid in his free time. Just look at some of these tweets and its use of diction only decipherable by high schoolers.

To anyone that doesn’t frequently use Twitter, some of these messages appear to have had little thought put into them and the account may have even been hacked. To a Twitter user, however, they know exactly what Denny’s was going for and they can relate to it, because they frequently use those emojis and expressions on Twitter, too.

Denny’s is simply pandering to the social media outlet its using. Although those tweets may have hardly flourished on an outlet like Facebook, they worked on Twitter because the inside jokes they were posting are exclusive only to the platform.