Social Media is About Establishing an Identity

The greatest benefit of social media is selling yourself and your product without spending too much money.

For the cost of nothing, outside of paying employees to execute the idea, you can create the same projects that would cost thousands of dollars if it were to be projected through a radio or television. All it would take is a camera, actors, the right editing, and a message to convey the same message that can be done with a television or radio.

And since it’s online, your audience could be even greater. Just like on the radio or television, you can even target your audience, and it only costs $1 to boost a post and target up to ten interests.

With all of these advantages considered, social media is the perfect outlet for a cost-effective method of establishing an identity, especially for small-to-medium-sized businesses devoid of the funds that require an advertising spot on radio or television.

However, an identity is a struggle to establish. There’s a need for experimentation with the content you create, the voice you project, and the tone of your posts. There are decisions to be made on whether or not you want your business to be projected as serious or humorous, as well as what type of content you’re going to be posting on people’s timelines.

The most important thing to consider here is consistency. There has to be a clear direction and a consistency. If you run a page about walkie-talkies, you don’t want to make a post about walkie-talkies one day and an irrelevant viral video the next. It’s inconsistent and your audience will be skeptical about following you if you’re just an aggregator of information. It cheapens the effectiveness of your brand if you’re posting videos and pictures that are merely shills for likes.

You may get new followers out of it, but you’ll lose the trust and interest of your fanbase as a result.

They followed you because of your product, not because you’re treating your business’s Facebook page like your own personal timeline. Stick to your identity. It’s alright if you want to post a funny or viral video or picture, but only as long as it’s relatable. For example, we run a Facebook page for diaper rash cream. Whenever we post a video or picture that isn’t specifically about the brand itself, it is at least related to the brand because it would feature a baby or a child.

It’s all about appealing to your targeted audience.

For that aforementioned page, we struggled to create an identity. We experimented with many methods and kept the posts close to home, but it rarely evolved into anything noteworthy. That is, however, until last week.

As much as I am a stickler for saying a brand should always post relatable content, I am even more adamant about good, solid, visually-appealing imagery.

Check out this graph showcasing how much more effective an image is than any other type of post: 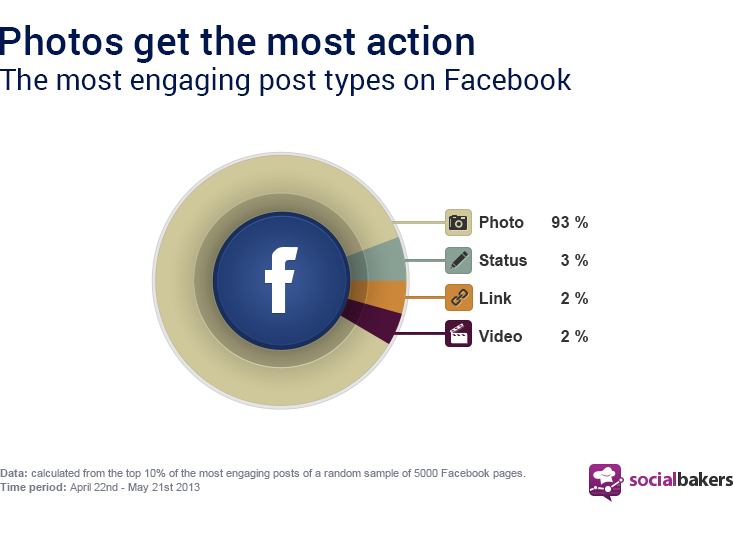 If you want to broadcast your message for all to see, there’s no more effective way than using an image. Now it comes down to using the right image. Stock photos are available for all to use, but the fact that they’re stock means you’re not creating any sort of identity. You’re essentially attaching a status to a face few people can relate to.

However, you can manipulate stock photos to your advantage and that’s exactly what we did. For the diaper rash cream account, we saw little success using stock photos attached to copy. The turning point came when we decided to blend the two: Putting the copy in the imagery.

It certainly helps that both are funny and shareable, likely aided by the copy in the post. I can guarantee you if we used the same image with the only copy being the one attached to the post, we would have not even seen close to the results we received here. It was only because the image was appealing and part of the copy was in the image that it was so well-received.

And because we experimented for so long with different methods, before finally hitting with this one, that we now have a type of post that’s proven to work. Most importantly, it’s specifically about out identity, which is why it will continue to work as long as the images continue to be visually appealing and the copy is a part of the image.

Facebook users don’t want to see the same tired images. They yearn for something new that no other page is going to offer. If they want to look at a stock picture of a baby, they can do that anywhere. You have to provide them with something that’s going to captivate and entice them enough into taking a look at your page and your posts.

If you’re just posting generic and basic posts, why bother? You’re doing what anybody can do. It’s those that work at it, have patience, willing to be creative, having perspective, and going above and beyond that succeed in social media, just like with any business or project.