One Twelfth’s 5 Social Media Insights for the Week

At One Twelfth, Inc., we do a lot of work on social media for a variety of accounts, ranging from diaper rash cream to exotic swimwear to an engineering scholarship.

We work for our likes and comments and shares around these parts. Lately, we’ve been making some significant breakthroughs in the arduous process that is getting your audience to notice your page, on a consistent basis, through all of the other pages that are clamoring for the same attention.

The past two weeks have been huge for us, and we’re going to pass along what we’ve learned to you with five insights we picked up from our research:

I’ve mentioned this many times in the past, but allow me to continue reiterating how important images are on social media until you can’t stand to hear me say it anymore.

However, it’s not just any image you should use. Anybody can post an image and call it a day, but there also needs to be the added element of how the picture should be taken.

You want to evoke emotions from your audience. You don’t want to prey on them, which is exactly what brands who profit off of tragedy have the lack of humility to pull off, but you want your audience to feel good. If you run an account focused on food, post pictures that will give your audience a sudden craving.

2. Switch up your strategy on different platforms

For example, you should be following your Twitter accounts at all times. Twitter is so great when it comes to customer service because it allows users to quickly shoot off a 140-characters-or-less text to you, without it possibly being jumbled, such as on a Facebook status where it can get muddled with a bunch of other comments about completely different things.

Plus, Twitter also offers account managers to use Tweetdeck, which allows you to type in a keyword associated with your product or service, and then observe who is talking about it.

On our Tweetdeck for an engineering account, we have verticals open for anyone who uses keywords such as ‘engineering’, as well as those that talk directly about our company. When we see something relatable to our work, we engage with that user and hopefully pick up a new follower, or assist an old follower, in the process.

As someone who spends entirely too much of his time on the internet, I have become all too familiar with the art form that are memes.

Memes are fun and easy to use on social media, but there’s a fine line between showing off your internet savvy and pandering to what you believe is the audience of the internet. If you don’t use memes correctly, such as what Fiat is doing with their obnoxious ad campaigns, people will notice and will be turned off your obvious pandering for profit.

Here’s how to do memes right: 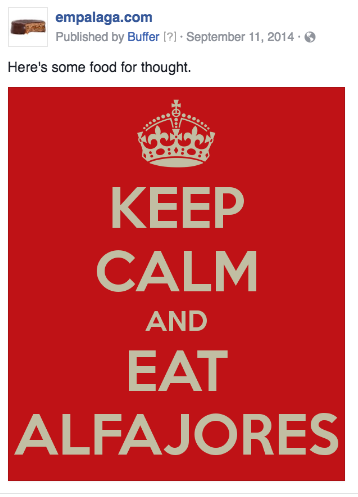 Simple, to the point, and doesn’t come off as desperate or forced at all. The results were some of our best numbers in the history of the account, with 64 likes and 18 shares.

Facebook, Twitter, and all other social media platforms provide you with the option to look at your post activity for a reason. Numbers never lie, and they paint a picture of which posts work and which ones don’t, among so many other variables you can look into to see how your page is performing.

By checking out the insights on Facebook, you can easily uncover at what time your reach is at its best, what day, and even the demographics of your audience, including the gender, age, and where they are Facebooking from.

Don’t allow advantages like stats to go to waste, while you sit in the dark and wonder why certain posts are working and others aren’t. The simple answer could only be a few clicks and a few minutes of research away.

For the past few weeks, I have been experimenting with a variety of posts to see which would work on this account we run.

The message here is to always experiment. If a type of post isn’t working, don’t stick with it for too long. Your audience isn’t responding because they’re just not interested in what you’re posting. But every audience has to respond to something, otherwise they wouldn’t follow you.

Falling short of running a contest, which is a guarantee to boost your engagement, experiment will all types of content until you find something that sticks.