If you’re going to out somebody as a lousy tipper on social media, do everything the opposite of what PYT, a burger joint in Philadelphia, did to a high-profile client.

Earlier this week, the restaurant posted a picture on Facebook of the receipt that was given to LeSean McCoy, starting running back for the Philadelphia Eagles. They weren’t showing off having the heart and soul of the Eagles dining at their establishment, but rather the tip that was left: 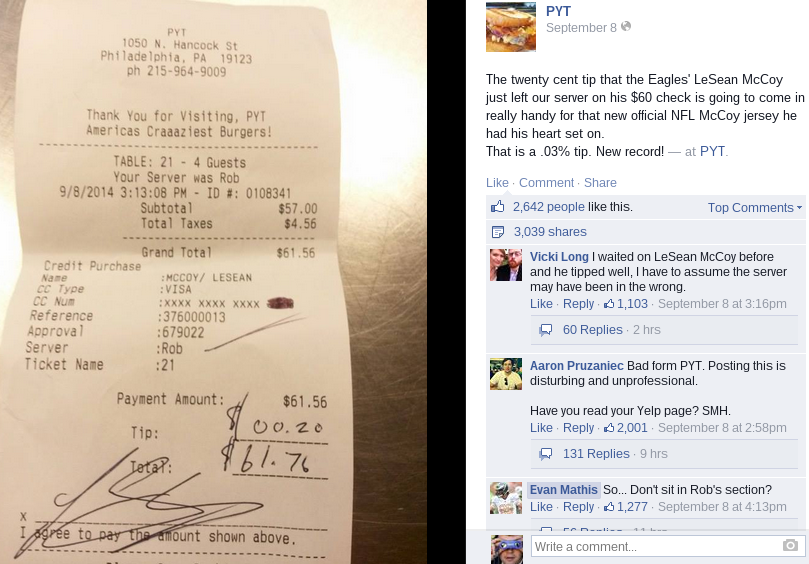 First things first, posting your client’s tip is probably the absolute worst thing you can do. This wasn’t a disgruntled waiter posting this picture. It was the actual restaurant, who obviously attempted to capitalize off of McCoy’s poor tip with some free publicity.

They got the publicity, but it’s not the kind they wanted. While PYT assumed the average customer would take their aside, probably thinking “Surely they won’t take the side of the rich athlete”, what actually occurred were people not only condemning PYT for putting LeSean’s information out there, but agreeing with his decision to leave a poor tip.

LeSean McCoy isn’t cheap. PYT just has terrible service apparently, and everybody knows now because of one social media disaster. 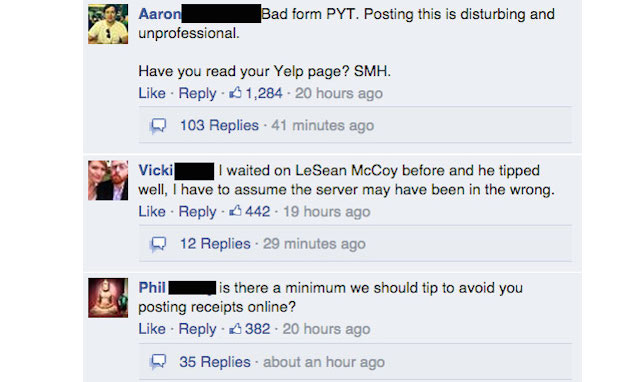 Social media can be a dangerous thing to play with. An attempt at gaining some publicity and outing an athlete as cheap completely backfired, with all of the blowback falling onto PYT, whose owner released a lengthy statement on Facebook earlier today. Here’s an excerpt: 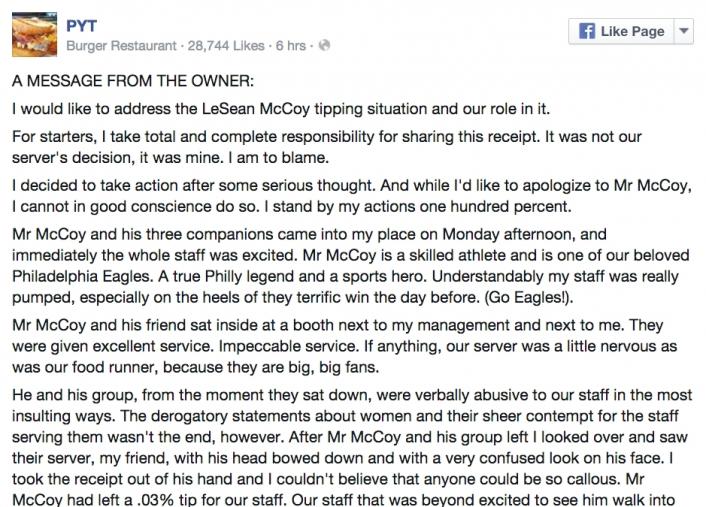 Not one to backdown, the owner would go on to say, “He and his group, from the moment they sat down, were verbally abusive to our staff in the most insulting ways. The derogatory statements about women and their sheer contempt for the staff serving them wasn’t the end, however.”

For the most part, people weren’t pleased. Because not only did the PYT owner manage to draw the ire of everyone across the country, but also Philadelphia Eagle fans, who probably are none too pleased that this restaurant attempted to expose their favorite player.

On McCoy receipt thing: my understanding is, he was really ticked about service. But org wishes he’d handled it differently. He understands

So, what’s the lesson here, kids? Don’t shame your customers and don’t think social media is going to be on your side simply because the millionaire customer that didn’t tip well is cheap and/or not a nice person.

Most of the time it’s because of your servers, and that’s on you.