Social Media: 6 Ways to Get Increased Engagement and a Great Response on a Single Post

In the infinite social media quest for likes, comments, shares, and overall engagement, there are surefire ways to not only get that engagement, but to also increase your audience, as well.

As the social media manager and creative copywriter for One Twelfth, Inc., it is my responsibility to generate the posts and ideas that are going to be put on the internet for all eyes to see. As I’ve come to learn, you’re going to mine in a search for gold in a whole bunch of places. You probably won’t strike it the first or second or third time, but when you finally do strike it, you’re going to be thankful for experimenting with different methods.

There’s nothing wrong with missing the mark on social media. Don’t forget that you are fighting with, as of April 2012, 42 million Facebook pages and, as of November 2013, over 230 million Twitter users. There are a lot of people and businesses fighting for the same thing you are: Attention. You just have to find the right niche, the right audience, and post at the right times.

But there’s a lot more to it than that, otherwise you’d have tens of thousands of likes on your Facebook page and wouldn’t need my sage advice.

Take a look at the six methods you can experiment with that should result in increased engagement and a great response from your following.

1. Engage with your fans 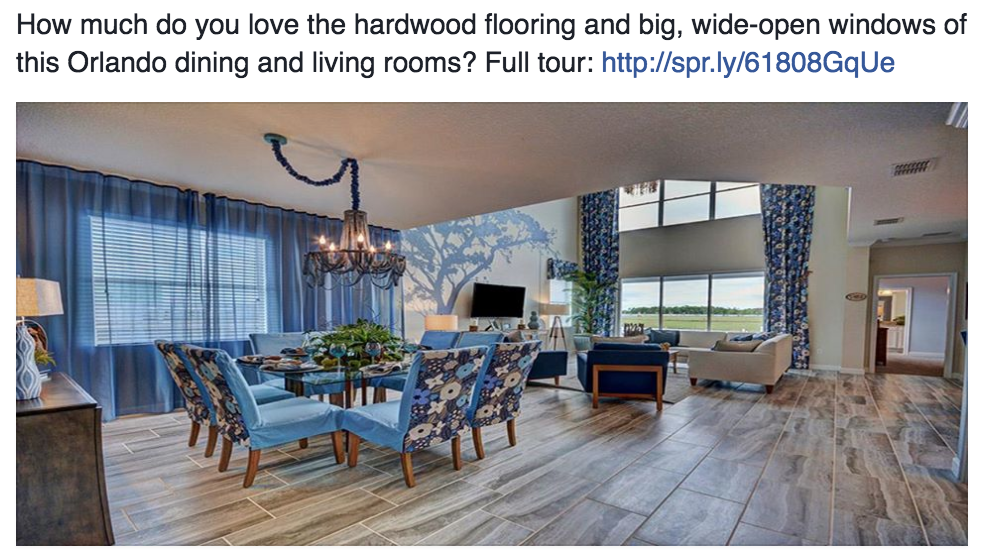 While statistics show fans follow brands mainly for discounts and contests, there are still plenty out there, including those waiting for those discounts, that still want to interact with their favorite brand. Social media is meant for transparency and to provide your audience with the opportunity to speak to their brand that they would have never gotten without the advent of social media.

Take advantage of this by connecting with your fans; ask them questions, take any comments or concerns seriously, and let them know there’s a personality and a face behind the brand.

As you can see with the image above, one of our fans was nice enough to send us an image of the school they went to.

2. Connect with your employees

Out of the 11 likes on a post celebrating the company’s employees , nearly half of those derived from the employees of that company.

Posts like this not only show you care about your employees, but they also show your audience how much their favorite brand appreciates the work their employees perform. That is extremely important, especially in this day and age. With the internet being a platform for any disgruntled employee to lash out at their former, or even current, company, brands need to use social media as a way of portraying themselves in the right light. 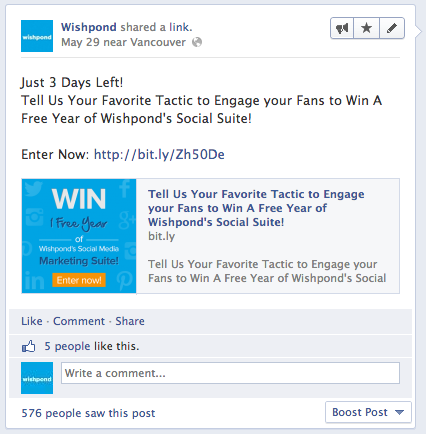 In a poll from June 2013, a study showed “60% of survey respondents said their main reason for “Liking” a retailer/brand on Facebook is to receive special promotions.”

You have to spend money to make money, even on social media. Staging a contest is a great way of building brand awareness, keeping the interest of your current audience, and generating new fans. Once they see you run one contest, they’re going to want you to run more.

It doesn’t have to be done once every week, but once every month, enough to keep your audience on its toes, should suffice.

Consider a contest as a way of saying thanks to your loyal fans. They’ve been buying your product and building your business, so why not show them a little appreciation by offering them the chance to take home something free of charge, something that they’ll be waiting by the mailbox for everyday to arrive.

4. Go behind the scenes 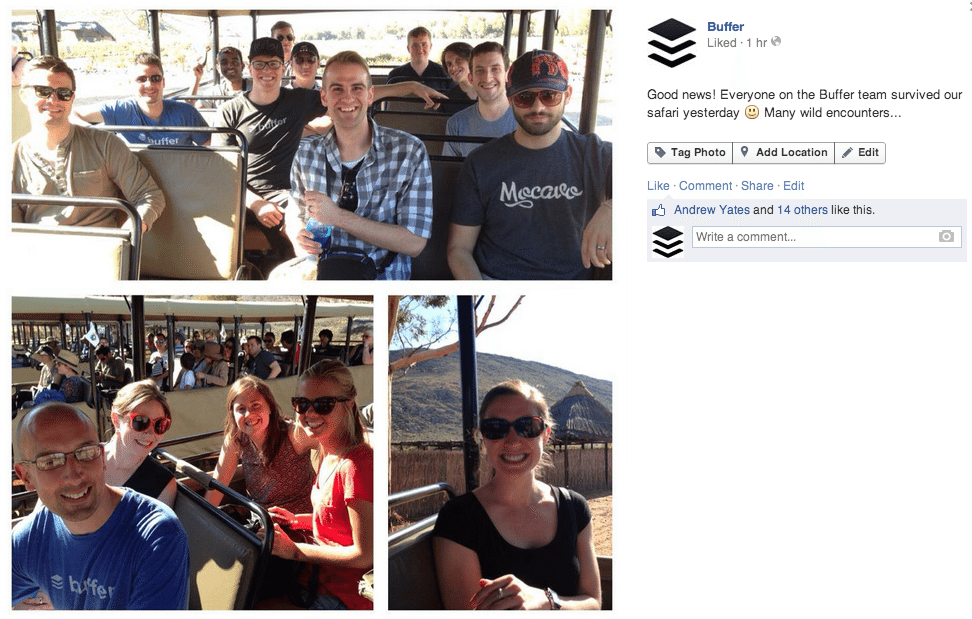 Time and time again on social media, transparency has played a huge role in a post getting an increased amount of engagement over a traditional post.

Think of it this way: Have you ever driven by a crime scene and thought to yourself, “I wonder what’s happening there”, or by a construction site and pondered, “I wonder what they’re building there?” You’re craving for transparency from the job, as we all do when we pass by a job that’s always interested us.

It doesn’t even matter if the job is an interesting as that of a cop or a firefighter. Transparency into seeing how clothes are designed or how things are run at a marketing agency, which you will see below, allows our audience to get an inside look at the inner workings, what makes the gears turn, and how their product is made. 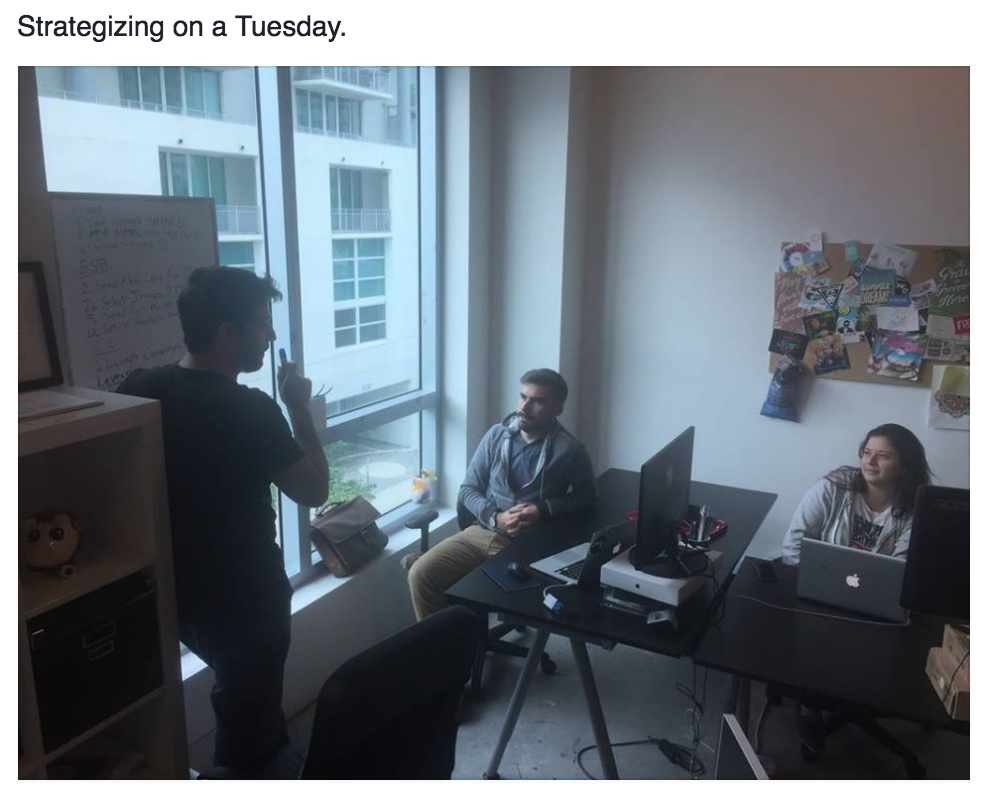 5. Show your support for the home team 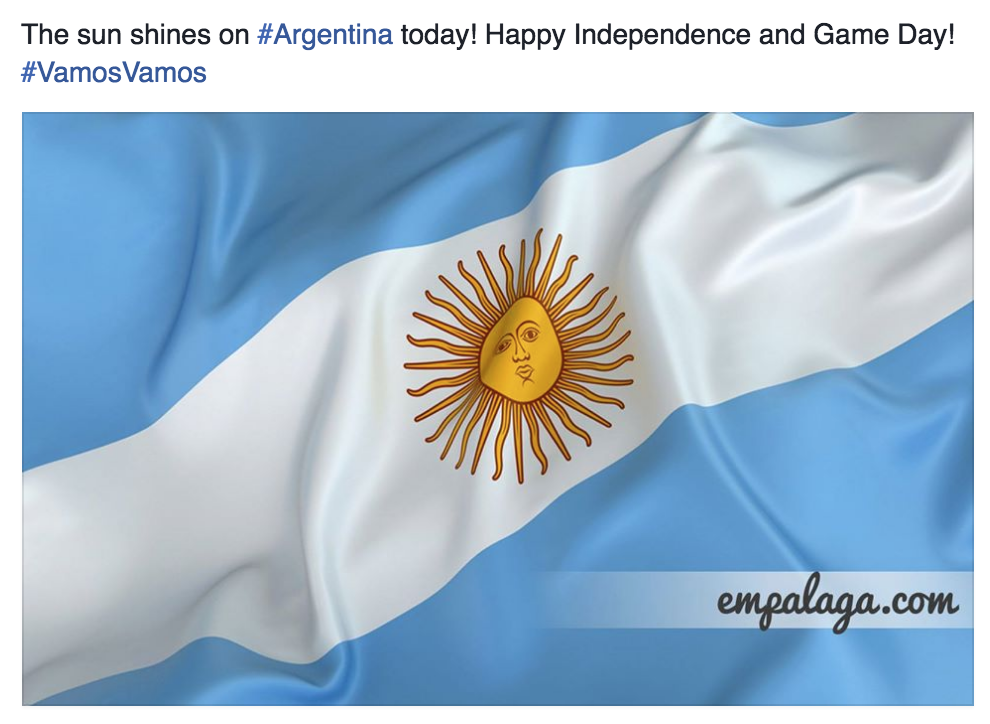 We got 70 likes and 25 shares we got for this post. That remains a page record.

They were, and still are, page records for two factors: One, we were timely and showed our support for Argentina at the World Cup at the right time (prior to a match they had) and two, our support was for one of our key demographics: Argentinians excited about the World Cup.

Since we’re only talking about small businesses, which usually means they’re localized and centric to a finite area, showing support for the home team, or the country your main clientele comes from, is perfectly fine and should generate plenty of attention your way. As a ravenous sports fan myself, trust me, if a brand I like shows genuine interest in the Miami Heat or Miami Dolphins, that brand just hooked me.

The same cannot be said, however, for brands with a wider reach. If you attempt to provide commentary on an event in sports and show support for a certain team or player, you just alienated a whole bunch of people. People are extremely devoted to sports teams and, speaking from personal experience, will avoid your brand because of the time you either made a joke about a favorite player or was cheering for a team that did not reflect your audience’s preference.

Sports fans are extremely devoted. You want them on your side.

If you want immediate results, I cannot reiterate the importance of being timely.

This past Sunday, I was relaxing from a hard week of generating engagement when this tweet found its way across my timeline:

#Noles Fans: Do you have a question for our starting QB Jameis Winston? Tweet us using #AskJameis.

Here’s a little background on why, as someone whose responsibilities include running a website that finds the funniest comments on humorous videos and embarrassing moments, the #AskJameis hashtag immediately brightened up my day and motivated me enough to work on a Sunday morning:

Jameis Winston is the Heisman Trophy winning quarterback of the Florida State University. Besides helping lead his team to victory in the most recent NCAA National Championship, Jameis is also extremely well-known for possibly getting away with rape and walking out of a Publix supermarket without paying for crab legs.

Despite winning the National Championship and college football’s most distinct individual honor, this is what comes up on Google search: 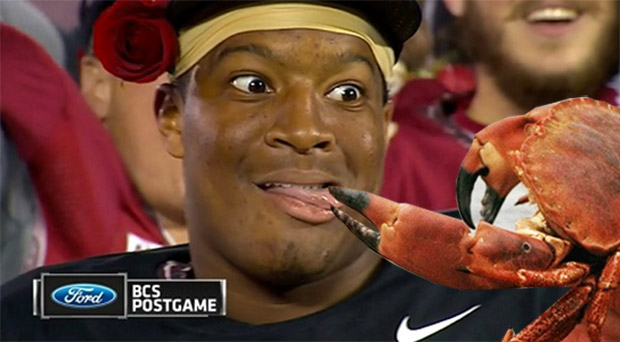 As you could guess, the #AskJameis hashtag was a PR disaster in the making and I had my computer, front and center, on DaCritics.org and Twitter, waiting for those first posts to fly in.

Make your presence felt when the social media universe is still buzzing. In this particular case, people wanted to see the best tweets about a hashtag, and I was fortunate enough to be running a website that’s dedicated to compiling those tweets.

The next time there’s a big event taking place, make sure to cash in by posting something relevant. As you can see, going that extra mile truly does work wonders for your brand.