Social Media is a Perpetual Grind, and 3 Other Insights

Clear your schedule for the next 30 minutes! It’s Insight Day!

We create these insights for our own personal benefit, as well as the benefit of small businesses and their approach to social media. Posting on a social media platform is simple, but it’s the execution and thought that goes into each post where most social media managers slip up.

We’re here to aid you in creating an audience and maintaining it, just as we have done here with the various social media accounts we run.

The World Cup wrapping up and LeBron James’s departure from Miami provided us with plenty of insights over the past two weeks, and we have done the research to see what did well and what flopped.

But we’re not going to talk solely about sports, even though they’re extremely successful when done right.

No, there were plenty of other insights to consider outside the world of soccer and basketball, including a startling discovery of a specific type of post that works and could change our entire marketing campaign for one campaign.

So sit back, relax and strap on your seat belt, because it’s One Twelfth’s four social media insights for the past two weeks.

Over the past week’s worth of monitoring a specific account, I came across one post that did unusually well compared to others.

Most of the posts of this account are similar and usually feature a story of a specific breakthrough in the field the account is centered around.

One day, the social media team at One Twelfth decided to try something else out: A human interest piece. It was worth a shot. The posts we regularly have up do reasonably well, but why not try something out to see if it works?

Sure enough, that human-interest piece did incredibly well, better than any post we’ve seen in almost a month with a reach of 248 people, six likes, and a share.

I have my idea as to why this post did so well:

Whatever the reason is, it should inspire social media managers not to limit themselves. If a post doesn’t work, fine. It’s just one post, and now you know for future reference that those types of posts don’t work.

But one day you will strike gold, and you’ll have being spontaneous and outgoing to thank.

Sporting events are a big-time opportunity for small businesses to take advantage and build an audience.

Showing your support for a specific country, which one of our accounts did with overwhelming success during the World Cup, or a team, which we at One Twelfth do for the Miami Heat, is a delicate process.

It’s a huge plus because you put yourself within the support of a fanbase, but it can also alienate the rest of the league or world, since there are a lot of countries and teams out there that you hope to lose in favor of your team.

For a small business, however, you can take that risk. If your company is localized and mainly does business within a few counties, it’s perfectly fine to show your support for the local team.

If you’re based in Miami and generally work around there, show support for the Heat. Have a small business in Chicago? Show that you’re a fan of the Chicago Bulls. The locals will love it, and you’ll be embraced by that fanbase.

For example, one of the accounts we run is based in Miami and sells Argentinian products. Naturally, we showed our support for Argentina in the World Cup.

The results were like none we ever saw before. Combining the three posts we made, we garnered 135 likes, 2 comments, and 29 shares. One post alone had a page-record 70 likes and 25 shares!

Passion and emotions were heavy in the World Cup. We capitalized and now we can’t wait for the 2018 World Cup to do it again.

Large businesses, however, have to be more general in their approach to sporting events. They can show that they acknowledge a significant sporting event is occurring, but they can’t show their support for a specific team.

For example, Tide tried to capitalize on LeBron James recent move to Cleveland with this post: 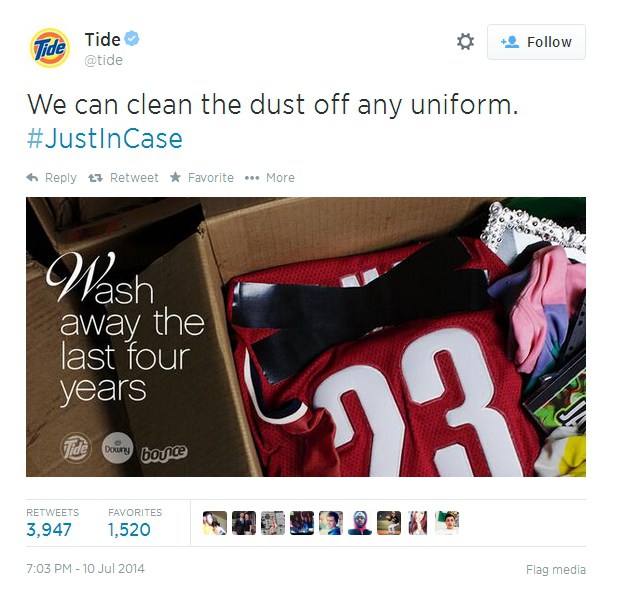 Judging by their reactions on Twitter, they’ll likely switch to Gain.

3. Play it cool with your calls-to-action

Advertising needs to be subtle. Nobody likes to have brands and products thrown in their face with loud colors and images screaming “BUY ME PLEASE” in their face.

We all know what the dating scene is like. Nobody likes desperation.

There needs to be subtlety. Compare copy in a social media post to any commercial you see on TV or hear on the radio. When you watch or listen to a commercial you don’t like and bothers you, it’s going to make you avoid everything to do with that product.

However, you also don’t want to be discrete in your pitch. Subtlety is important, but you don’t want to be so subtle that your audience has no idea what you’re selling, which is just as bad as the in-your-face method.

Go back to the dating scene. If you’re going to make an impression, make it count. Don’t be too over-the-top and don’t be too boring. Find that fine line that will be successful.

Subtlety is an art. There is an extremely fine line between being so obvious it’s painful and so ambiguous that you fall asleep just listening to the pitch.

When it comes to calls to action, be direct, concise, and urgent. Get to the point immediately. Save the aesthetic stuff for TV commercials. On social media, with so much information flying in at every second and people’s attention spans waning, you have to make each word in your call-to-action count.

4. Social media is a grind that does not sleep.

I preach perspective in these insights, as well as in my personal life, because of it’s effectiveness creating empathy and understanding.

Never did I expect the obstacles and difficulties that would come with being a social media manager. It’s so much more than a few words of copy and the occasional image or link. A lot of work goes into each and every post.

And it has to be done every day. Sometimes twice or even three times a day. Each post has to be perfect, direct, and effective in its message.

Out of the hundreds of posts I do for a variety of accounts, one mistake, whether it be forgetting to include a link or creating copy that’s not well-received, will put a lasting blemish on your account’s legitimacy.

Don’t think, either, that posts are a simple concoction that’s made up in a few minutes. Every post you see for a month has to be done at a single time, meaning that the post you see per day on an account was likely done within the span of an entire day’s worth of brainstorming.

Those are just the posts that are set in stone. That doesn’t even include having to stay on top of current events or breaking news stories that go viral. With social media, timing is everything, and you can’t be too late to post, but you also don’t want to rush out a post that’s not going to go over well.

There needs to be a great deal of confidence and pride put into every post. Consider each post as your last, and always take extreme consideration into every single word that’s a part of the copy.

Write each post as if there’s someone on the other side of the screen that’s thinking of buying something, but needs that extra push to follow through. You have to be that push.

When you make up copy: Edit. Then edit again. Then edit some more. It’s extremely likely your first draft is just that: A draft. Read over it a few times to see if it sounds right